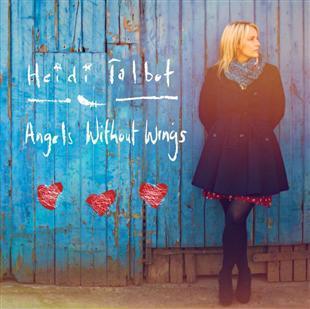 With an impressive line-up of guest musicians which includes Mark Knopfler, Jerry Douglas, King Creosote, Julie Fowlis and Tim O’Brien, Jerry Douglas, Ian Carr, Louis Abbott, Boo Hewerdine, Michael McGoldrick, Phil Cunningham and Karine Polwart, you would expect quality, and that is what you get. However Heidi Talbot’s latest release Angels Without Wings is not a traditional folk album. The majority of the songs have been written by Heidi together with Boo Hewerdine and John McCusker, and it has more of an easy country sound to it.

Of course, the songs and arrangements are influenced by traditional themes - Dearest Johnny being the most obvious. The title track is a laid back waltz and has more than a whiff of the French café with its accordion accompaniment. Another waltz with a French connection is the New Cajun Waltz, which is equally gentle. My Sister the Moon first saw the light of day as a demo version on the compilation This is Proper Folk Too and here is delivered with exquisite simplicity.

The country sound comes to the fore in the duet When the Roses Come Again with its catchy chorus and simple instrumentation, while Wine and Roses is a whimsical look back at young love. Broken relationships, that common theme of folk music, is covered in I’m Not Sorry.

There is nothing on this album to over-tax the ear - everything is a pleasure to listen to.