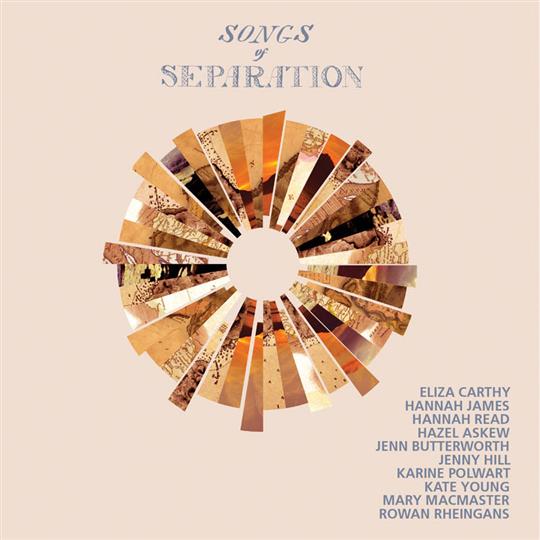 Never mind six, Songs Of Separation is ten of the best. Not whacks from teacher’s slipper for the Bash Street Kids, but ten ladies/musicians of the sort of calibre you can only dream of coming together when the stars (and more importantly, the schedules) align. In fact, locating themselves on the Isle of Eigg, home of the fascinating legend of the big women of Eigg, may well have been the only place you could have gathered and kept all ten together, as well as acting as an inspiring environment for them to cast their creative dice.

As some like to say, the album does what it says on the tin. The theme of separation is at the core of all the material, all traditional songs which explore the issue in the context of a post-referendum world while celebrating the similarities and differences in musical, cultural and linguistic heritage. So, with the rationale clearly defined, how do they shape up in carrying out Jenny Hill’s vision?

Karine Polwart’s Echo Mocks The Corncrake has already been teased ahead of releasae as the single and as the opening track. It is a dense and rhythmic tour de force; Karine backed by a chorus of menacing voices, almost a modern day clarion call of the big women of Eigg, creating an image which sets the scene for a dark ride. As a single it’s backed with the contrast of the gently picked A’ For Our Rightfu’ King featuring Hannah Read.

From the ominous to the gentle to the jaunty and despite its title, Poor Man’s Lamentation has some fine fiddling. The styles become even more wayward, to coin a phrase, with Eliza Carthy’s Cleaning The Stones appearing less native and more trad in a distinctively polished and elegant string embellished performance, while Sad The Climbing is delivered in a combination of voices in native tongue as one of two site recordings made while on the island. It captures a natural ambiance which would appear to be from the Cathedral Cave, where you can even hear the rustling wind captured on mic at the start of the recording. The second recording finds the gang by the shores of Loch nam Ban Mora - the sense of experimentation and getting back an organic feeling coming across ever so powerfully.

Sad Am I follows suit with some basic rhythm guitar and pipes adding to the Celtic ambiance. This follows all the way through to the combination of different voices in the deliberate opening to Over The Border, which develops into something akin to a joyous highland reel (perfect encore material), and the perfect album closer in A Road Less Travelled. There’s a refreshing variety and consistency which is often hard to nail down with so many contributors. Clearly a case of empathy between all ten collaborators.

Who, by name - Eliza Carthy, Mary MacMaster, Kate Young , Hannah James, Rowan Rheingans, Jenny Hill, Jenn Butterworth, Hazel Askew, Hannah Read and Karine Polwart - are almost enough for a female folk football XI, and indeed a dream team who have explored a fascinating tradition and come up with a worthy legacy in a veritable cornucopia of music. Funded and supported by Creative Scotland, the Arts Council, Enterprise Music Scotland and Beyond Borders, it’s good to see that a project like this is valued. There are still surely plenty of lyrical themes to investigate which explore topical and social issues - songs of our time carried through the strength of the music - and something which will likely be clarified during the short run of live dates in late January 2016.

While taking care not to lapse into overdramatics, Songs Of Separation is a thought-provoking emotional roller coaster of an album with its highly evocative songs. And hard not to imagine the Songs Of Separation band marching through the fields of the isle as the new big women of Eigg.

Released on 29th January 2016 on Navigator Records.
Recorded on the Isle of Eigg in the Scottish Inner Hebrides.