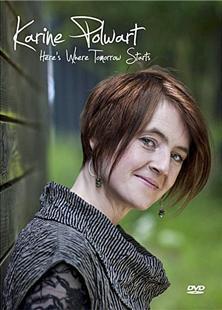 Karine Polwart’s first solo project since her 2008 album This Earthly Spell is a rather different proposition: a DVD of exclusive performances interspersed with insights into her motivations and how she works.

Here’s Where Tomorrow Starts is filmed in a naturalistic style, rather than comprising a gig or normal live performances. There is an intimacy in sharing the songs just between the musicians and viewers. It is also good to be able to see instruments being played up close; useful for both curious fans and budding musicians.

It is however slightly odd watching these performances as the musicians consciously avoid eye-contact with the camera. You are at once both incredibly close to them, yet an element of distance remains that is only removed in the interview sections sprinkled through the DVD.

On most of the tracks Karine is accompanied by her brother Steven, and Inge Thomson, her regular touring partners. Inge’s singing complements Karine’s voice, and the introduction of Signy Jakobsdottir on percussion for some songs gives an extra dimension and texture.

A number of different locations in and around the recording studio are used for performances, with Rivers Run filmed outside by a field, and Salter’s Road sung on that very road.

We also get some tracks with Karine accompanied by Kim Edgar on a white grand piano. The result is quite anthemic, and rather creepy at times, particularly on Blood, Ice and Ashes. It makes a welcome change of tone on what is a packed DVD of 17 tracks.

Perhaps the most striking track though is the most pared back, with just Karine and a shruti box sitting against a dry stone wall. Tongue That Cannot Lie takes the classic Scottish folk song Thomas the Rhymer as inspiration, moving the concept of being unable to lie into a more modern setting.

Producing a DVD that is not a live performance, nor a documentary or form of tuition is not the most obvious choice for a musician, however, for fans of Karine Polwart there is much to recommend Here’s Where Tomorrow Starts, not least as a taster for her next album, due out in 2012.