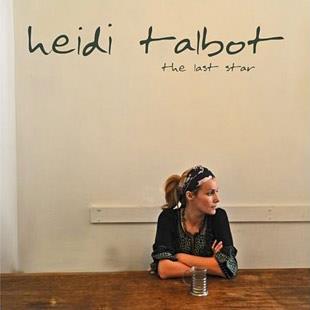 The Last Star is Heidi Talbot’s second solo offering - and for this outing she has drawn on a veritable Who’s Who of folk celebrities to join her in creating an album that seamlessly blends traditional folk songs with self-penned numbers. That’s not to say that the album is propped up in any way simply on these collaborations, Talbot’s vocal talents alone should be enough to encourage any folk fan to buy the album.

The opening track of the album, Willie Taylor, is a new arrangement of the traditional song telling of the young girl who, on the eve of her wedding day happens to find herself in the unfortunate situation of having her husband-to-be pressed ganged into the army. After joining the army herself to track him down, on finding that he has been unfaithful, she takes the only option open to a girl in a folk song - she shoots him dead!

Self-penned Tell Me Truly is a wonderfully mournful tale of courtship set to a waltz. Featuring music by John McCusker and Boo Hewerdine, and harmonies from Kris Drever, Eddi Reader and Karine Polwart providing a haunting chorus to Talbot’s own vocals, this is one of the stand-out songs on the album.

The pace of the album ups slightly with Sally Brown, a sea shanty, and Bleecker Street, a take on the oft-told tale of a sailor falling foul of a Lady of Negotiable Virtue in New York, both of which gives Talbot’s lilting Irish cadence a chance to shine through over the music, proving just what a wonderful voice she has.

Closing the album is a cover of Talbot sings an effortless cover of Sandy Denny’s At The End Of The Day - a fitting finale for an album that manages to fuse both old songs with new folk music.

Released by Navigator Records on 4 October 2010