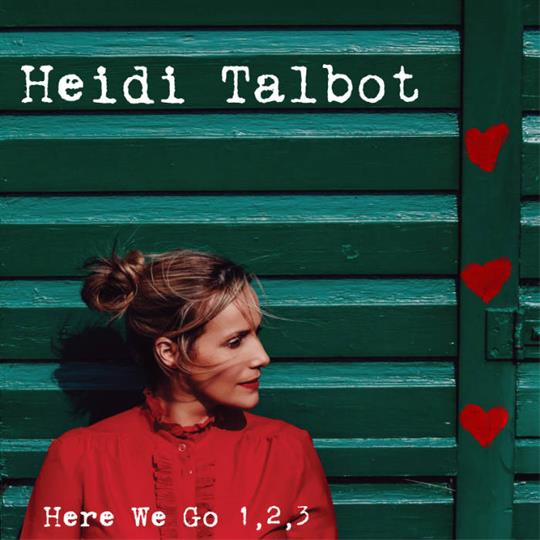 They say a change is as good as a rest but there’s something to be said for the comforting feeling when you encounter the friendly and the familiar. Just twenty seconds into a new record and you’re hearing the first words from a reassuringly distinctive voice; a sign to settle down for another journey across cultures and styles with Heidi Talbot.

The intriguingly titled Here We Go, 1, 2, 3… is Talbot’s fifth solo album, once again with husband, musical partner and 2016 Folk Awards Good Tradition winner John McCusker as attendant guide. A whole host of musicians also play their part, including Innes White, James Mckintosh, Megan Henderson and the magical Michael McGoldrick, but it’s unquestionably Heidi Talbot at the helm, taking writing credits for eight of the ten songs on the album.

“A lot has happened since my last album” she’s said - indeed, and it has provided the inspiration for exploring the tricks and traits of tim , resulting in a set of songs she’s described as “measured and unhurried” and ones which “reflect on birth, death and getting older” - themes we can surely all appreciate, and typical of an album which fuses the topics of grief, depression and love in an enlightening and heartening way.

A vein of hope runs through the core. It is all built round a medley of musical styles ranging from country pop to bluegrass, and the title track taking inspiration from an old gospel song. It’s the latter which provides that uplifting energy, almost sing-song-like, on the opening track where, quite aptly she sings of hearing angels sing. We can all empathise.

Aside from the original compositions, there’s a respectfully stately reading of Natalie Merchant’s Motherland and, in The Willow Tree, there are references to the Child ballad Lady Isabel And The Elf Knight.

But the Talbot et al originals are thetracks which hit the spot. There are strong nods to faith and beliefs in the bluegrass psalm Do You Ever Think Of Me and Adam Holmes’ exquisite mortal jig Time To Rest, but ultimately the album’s strength is how it draws on the personal and reflective - The Day That I Was Born, Tell Me Do You Ever Think Of Me and Song For Rose (will you remember me) in particular strike a chord and delve deep; Talbot talks of the latter almost in a therapeutic fashion and despite the positive light in which the songs are framed, it’s difficult not to feel a lump rising in the throat or a tear swelling behind the eye.

If we’re talking about music having the power to evoke feelings and touch the heartstrings, then Here We Go 1, 2, 3... is a prime example.