The Burns Unit - Side Show 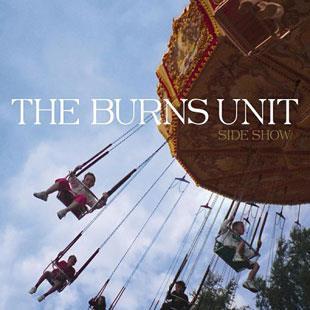 The members of The Burns Unit were gathered together for
“Burnsong”, a week-long songwriting retreat held in rural Scotland in December 2006, (rather like the Darwin Song Project organised by Shrewsbury Folk Festival last year). They are: Karine Polwart, King Creosote, Emma Pollock, Future Pilot AKA, Kim Edgar; Mattie Foulds; Michael Johnston and MC Soom T. While taking their name from the retreat, they don’t actually do any Robert Burns songs.

The Burns Show have played a few live shows, to sell-out audiences, and while they have no performances planned at present, they are well worth looking out for.

With such a diverse collection of musicians, it is virtually impossible to categorise this album. Even the term “supergroup” (used on the band’s website) seems inadequate, as folk, rock, rap, ska, pop and bhangra are just some of the styles you will hear. Some tracks are danceable, some thought-provoking, but somehow all this works together to produce an exciting sound that should appeal to a wide audience.

The songs are written by members of the band, in various combinations and six of them take it in turns to sing lead vocals, with duets on some tracks. Indeed the album begins with a stunning duet between King Creosote and Karine Polwart “Since We’ve Fallen Out”, while Emma Pollock and Michael Johnston join forces for “You Need Me to Need This”.

As well as a being in a variety of musical styles, the songs deal with a variety of subjects, from the political (“Send Them Kids to War” and “What is Life“), to parenthood (“Helpless to Turn”), from nature (“Majesty of Decay”) to murder (“Blood Ice and Ashes”).

The result is an exciting mix, which I am playing over and over again. Congratulations to The Burns Unit for producing a winning combination.