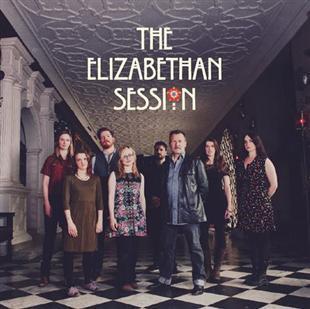 To say The Elizabethan Session album gets off to a dark start would be something of an understatement. The eight singers, songwriters and instrumentalists assembled by the EFDSS and Folk by the Oak have come up with a dazzling album inspired by the time of Elizabeth I, but it’s one that doesn’t shy away from the era’s bleakness.

The album begins with Shores of Hispaniola, by Nancy Kerr. When we interviewed the Elizabethan Session crew at Monnington House in Herefordshire, back in March, Kerr’s project-mates expressed their astonishment that she had written it before breakfast one morning. And this is understandable - it’s a gem, with Rachel Newton’s harp and Hannah James’ clogs setting the scene for a dramatic look at the slave trade, told from the perspective of a woman whose lover has been abducted by Admiral Sir John Hawkins and his crew.

Back on land, London, written by John Smith, is told from the point of view of a ’terrified peasant’. Smith sings of a city in thrall to the whims of Elizabeth, who “shines all over England / though I’ve never seen the light” - Martin Simpson’s slide guitar adds menace to an elegant string backing.

And the sense of foreboding is only amplified by Simpson’s own composition, titled Christopher Marlowe. A simple, sweet-sounding lament, it begins with the stark image of the effervescent playwright face down in a Deptford pub.

Bleak as some of the songs are, they represent collective and individual imaginations fired by the group’s time in the house, and by their resident historian, Dr Ian Mortimer. Simpson and Smith worked together on the brooding Elizabeth Spells Death, which returns to the theme of the Queen’s terrifying power, at a time when her elaborate signature would indeed mean the end for any number of conspirators, enemies and - in the case of Mary, Queen of Scots - fellow monarchs.

Literature of the era is a strong influence - William Shakespeare is referenced by Bella Hardy’s subtle Love-in-Idleness, written as a lament for Hermia of A Midsummer Night’s Dream. Rachel Newton’s Come Live With Me is a beautiful, sensitively sung marriage of poems by Marlowe and Sir Walter Raleigh, and Eve’s Apology in Defence of Women, by Aemilia Lanyer, is sung in beautiful harmony (with inevitable hints of Lady Maisery) by Newton, James, and Emily Askew. It transforms irresistibly into the lively tune Gather the Owls, complete with Askew’s fizzing hurdy-gurdy.

Early music expert Askew brought an Elizabeth authority to the group’s music, and she shines on the Monnington Pavane, a sped-up version of the 16th-century dance to which she adds dainty period recorders, violin and vielle. The Lover’s Knot Untied - written by Askew and James - also transforms into an Elizabethan dance, in this case a joyous galliard.

Jim Moray, modestly sticking to the piano for this project, presents one of the album’s highlights. The Straight Line and the Curve - about John Dee, the philosopher-occultist who attempted to communicate with angels in his ’scrying mirror’ - is superb, stately and sincere. Moray’s piano also backs the prolific Kerr on The Oak Casts His Shadow, while Simpson and Smith’s guitars duel in rather fiddly fashion on Broadside, whose Kerr-written and sung words honour ’sea queen’ Grace O’Malley.

In among all the period pieces, Hardy’s Hatfield stands out. A melancholy sketch of her personal memories of Elizabeth’s former home, it makes for an interesting and unexpectedly moving approach. And the album ends on the unlikely union of Elizabethan poetry (this time written by the Queen herself) and country music: Suspicious Mind, which sees Smith and Kerr present a somehow light-hearted exploration of longing and mistrust.

The project’s subject material - absorbing and thrilling, even for non-history buffs - is diligently and emotionally explored by a group of musicians who clearly clicked, while recognising that it wasn’t necessary for everyone to play on everything. That an album this good was composed in a week is deeply impressive - but it would still be an excellent piece of work had it taken longer.

Released on Quercus Records on September 8 2014