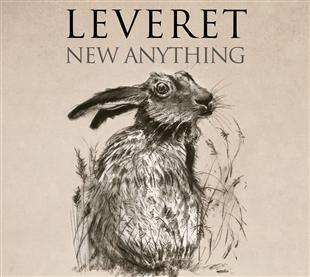 When a band records an album it’s a snapshot in time, preserving the sound and musical direction of the group as it stands at that moment. An album can take days, weeks or even years to record with artists constantly tweaking the songs until they arrive at the finished product.

New Anything is a little different as it was recorded live, without overdubs, on one day in July 2014. The results speak for themselves.

Leveret combines the talents of Andy Cutting, Rob Harbron and Sam Sweeney who play both traditional and self-written tunes to stunning effect. The album is both epic and intimate, it sounds new but it has roots that stretch back hundreds of years.

There’s an element of spontaneity throughout this album. None of the pieces has been arranged as such, the three musicians feeling that all decisions about how the tunes develop should be made in real time.

This is evident right from the first track, Bagpipers. This is a tune found in the 1799 manuscript of William Mittell of Romney, Kent. This is a simple, slightly mournful tune played at a steady pace. It’s obvious that each musician is listening to what his colleagues are playing as the tune ebbs and flows between each instrument while the texture thickens or thins according to mood.

Gallons of Cognac is a jollier piece, written by Sam Sweeney for his Great Uncle Henry. This sprightly tune is developed into something more complex but never loses its shape.

Three of the tunes have their origin in that great repository of traditional material, Playford’s English Dancing Master. Jenny Pluck Pears is a jig but is here played with a slow introduction which is very effective. St Catherine’s (coupled with the sprightly New Anything) is a lively piece which shows off the dexterity of the musicians to great effect.

The final Playford tune is Upon a Summer’s Day. The melody is first taken by Sweeney (who must have one of the most distinctive fiddle sounds around) before passing it on to Cutting and then, finally, to Harbron. This tune goes straight into the Abbots Bromley Horn Dance a piece none of the band can remember learning!

The album ends with the barnstorming Whitefriar’s Hornpipe/ Purlongs set. Both tunes are played at quite a pace but not so fast that the listener cannot pick out the melody from the surrounding accompaniment. It’s a breathtaking finish.

New Anything is a remarkable achievement. It is the technical mastery of Messrs. Cutting, Harbron and Sweeney combined with a sensitivity and empathy for each other’s playing that makes this CD such a joy to listen to.

Album of the Year? I think so.

Released on the 26th January 2015 by Rootbeat Records.