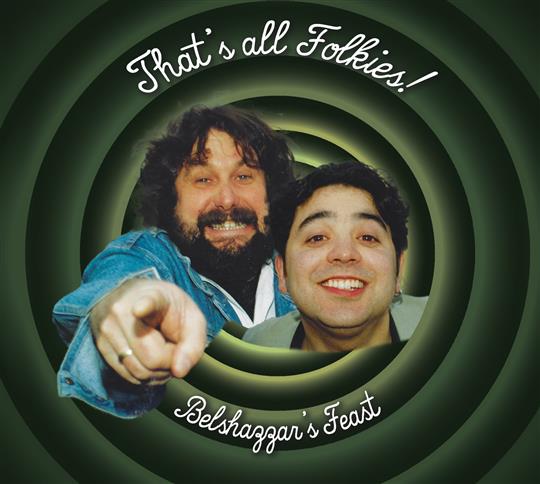 It is a somewhat melancholy task to be reviewing That’s All Folkies, the final album offering from Belshazzar’s Feast. Well, fair enough; amongst their prolific output in numerous other folk groups, Paul Sartin and Paul Hutchinson have been at it for a quarter of a century. The pair met whilst they were both members with the folk rock band Life of Reilly in the 90s, and thus a marvellous duo was spawned.

During the ensuing 25 years “the Pauls“ have recorded no less than 11 albums as Belshazzar’s Feast and have toured mercilessly, embellishing their accomplished musical performance with trademark dry wit and a cabaret approach. Their repertoire blends classical, pop, traditional folk and music hall - sometimes all within the same medley.

Paul Hutchinson on accordion and Paul Sartin on fiddle, oboe and vocals are joined on a few of the studio tracks by guest musicians including James North, Rob Harbron, Will Balkwill, Pete Flood and Brendan Kelly. Many of the tracks have traditional roots in folios of dance tunes but there are also some original compositions and a sprinkling of trad songs and classical pieces. This sampler is a true reflection of the broad reach of Belshazzar’s Feast; selecting just a single track from each album to bring to this sampler must have been an excruciating task.

The live tracks on this album best convey the USP of the band. On the seventh track, a skilful and comedic arrangement of Mozart segued with Vivaldi is preceded by an illuminating discussion about the derivation/provenance of the pieces and a worthy observation that these are “ancient and rather unremarkable tunes which we have rescued from obscurity”. Likewise on track 11, where the audible audience mirth only enhances the Les-Dawsonesque arrangement of Beethoven.

This same set meanders through The Knapsack Song, Postman Pat and arrives at reference to a song we shall refer to only as ’Hitler’ - which the audience whistles along to when invited, but then baulks at adding the rather un-PC words. At the far end of the album, there are three hitherto unreleased tracks providing a bonus for long-time listeners.

Mention must be made of the touching Hampshire song Home, Lad, Home (words Cicely Fox Smith, melody Sarah Morgan) at track 10. It tells of the men and horses lost in the trenches of World War I, delivered clearly and without melodrama by Sartin over Hutchinson’s subtle and poignant drone accompaniment. A very beautiful moment.

This album is complimented by brief but informative track notes from Hutchinson and Sartin, helpfully explaining which tunes are suitable for Pilates, aerobics or lap dancing and also decoding the origins of their original compositions. For seasoned fans, this album represents a beautiful capsule souvenir of the career of Belshazzar’s Feast. For the uninitiated it surely provides a motive to book a ticket for the farewell tour this year, whilst the live Feastie experience is still available.