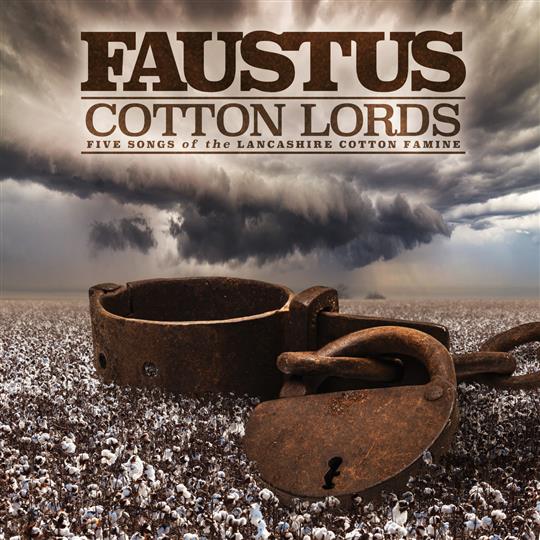 Between 1861 and 1865 the Lancashire Cotton Famine in Northwest England, caused by overproduction and by the boycott from the belligerent Southern states of the USA, brought thousands of people into poverty. English workers and a number of entrepreneurs did not want to assist the slave-owning Southern states and many men and women found themselves with no livelihood.

In this distressing scenario, many of them composed lyrics and music that have been collected by a project from Exeter University. Faustus, Paul Sartin, Saul Rose and Benji Kirkpatrick, selected five of these texts for Cotton Lords and, when necessary, reconstructed music for them.

The title track is a protest song against the industrialists, accused of ignoring the sufferance of these workers. Lancashire Operatives (Starvation) and Lancashire Factory Girl represent the feelings of a man and a woman that just hope for the end of the troubles.

Wrongs and Rights is a satirical song based on an archaic rhythmic scheme which allows the trio to display their expressiveness and talent. I Would This War Were Ended, transposed from Lancashire dialect, expresses the hope for the end of the American Civil War and therefore for the rebirth of Cotton Industry in that region.

Peace and the poor relief system could not erase these workers’ sorrow. Faustus’ interpretation conveys all the desperation, hope and irony that these lyrics contain and allows the listener to touch the ghosts of a forgotten world.

Released 26 April 2019 on CD and digitally on Westpark Records. Produced, engineered and mixed by Matt Williams.