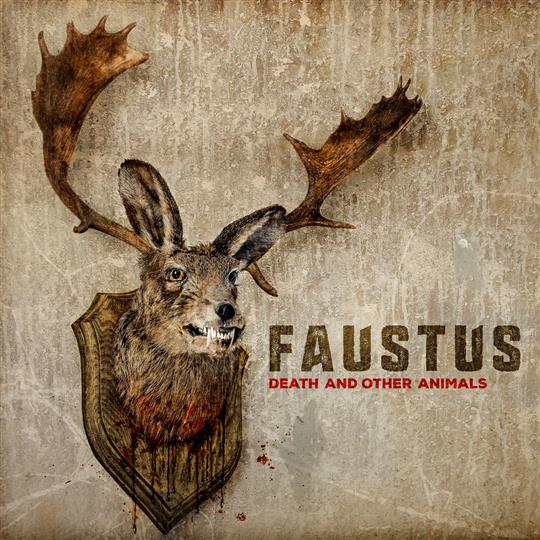 Finally, after four long years, the first blokes of folk make a blistering return to save us all from the fay and the wan with their most powerful and ambitious set to date.

During 2016 Faustus have been band in residence at Halsway Manor in Somerset. Not only was Death and Other Animals recorded here but the Manor’s library was raided for album material.

Rupert Christie, fresh from his production duties with Bellowhead, has been recruited to punch up Faustus’ already big sound, whilst still letting each instrument shine through. And it’s not just the production that has changed. Song arrangements are more complex, there’s more harmony singing and there’s more nuance too.

Take Faustus’ version of Oh To Be A King. This song, by Bill Caddick, meditates on the differences between a king and a working man. The arrangement is expansive with gorgeous harmonies and a long instrumental coda that weaves beautiful strands of melody between each player.

Gurt Dog is a setting of Olivia McCannon’s poem. This is a variation of a Somerset legend about a ghost dog. For once, this is not an evil creature but one of a benevolent nature. Indeed, at one point, the narrator kisses the dog’s nose. Paul Sartin’s arrangement is simple and effective.

However it’s in the presentation of traditional songs and tunes that Faustus truly excel. From the funk of False Foxes to the pathos of The Death of the Hart Royal, the album is full of contrasts.

A setting of the shanty One More Day surely takes its inspiration from the line, ’oh rock and roll me over’. Which is exactly what Faustus do with the tune. Certainly the rockiest song on the album, it has two blistering solos from Kirkpatrick, powerful vocals from Sartin and contains a very cheeky key change. What more could you want?

Finally, beginning with a single bell chime, Death Goes a Walking tells of the titular character bringing everlasting sleep to all but the one who wearily longs for it. The song, well sung by Saul Rose, is interspersed with scraps of a familiar tune that only becomes clear at the end of the piece. It’s a fine joke with which to end the album.

Death and Other Animals is Faustus running on full steam. If they have made a pact with the devil then it’s surely serving them well.