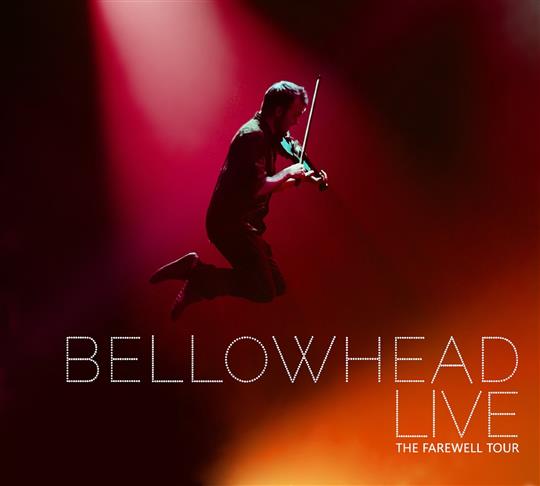 After five albums (and one EP) countless tours, a fistful of awards and lots of bouncing, Bellowhead, to the distress of their fans and the delight of their detractors, have decided to call it quits.

Consisting of a concert DVD and over two hours of live music on CD, Bellowhead Live: The Final Tour is a package of audio and visual treats to make their going a little less hard to bear for their legions of followers.

The package is sumptuous. A hardback CD-sized book filled with glossy photographs by Elly Lucas houses the three shiny discs. The text is minimal, consisting of tracklists and production credits but, oddly, no listings for the players themselves.

The DVD is a, more or less, faithful recording of the Leicester De Montfort Hall gig that took place on the 19 November 2015. It’s certainly complete when it comes to the setlist but, sadly, all the inter-song banter has been cut out. This is a pity as one of the incidental joys of a Bellowhead gig are the often witty introductions to the songs and tunes. It is a great shame that Brendan Kelly’s epic explanation of Fine Sally is not preserved for the ages.

The director, Jack Van Spall, mostly eschews the quick cutting technique favoured by most concert videos. Instead, Spall uses longer takes favouring one or two musicians. This has its advantages in that images don’t disappear in the blink of an eye but it also means that the livelier pieces sometimes seem lacking in visual pace.

Eight cameras were used in filming the concert and there’s a great variety of shots from all parts of the auditorium. Front row attendees may, or may not, like seeing themselves in action but the audience are part of what make a Bellowhead gig so special.

Of course, the great advantage of a live video is that the viewer gets to see things they might not catch when attending a gig. It’s great to see the genuine enjoyment of the band as they work up a head of steam on such classics as Haul Away and New York Girls. The camera captures the silly dancing of the brass section, the incredible leaps of Sam Sweeney and the mysterious smile of Pete Flood.

Bellowhead are lucky in having a lead singer like Jon Boden. It’s a real pleasure to watch how he uses his hands and eyes as expressive instruments to convey a song to a large audience.

Indeed it’s Bellowhead’s ability to take a traditional song and mould it to their own style which makes a performance by them so satisfying. From the avant-garde of Black Beetle Pies through the Weimar influences of What’s the Life of a Man?, to the party music of Frog’s Legs & Dragon’s Teeth; the range of musical styles is astonishing.

The two CDs that accompany the DVD provide further delights for the Bellowhead fan. Twenty-nine tracks, handpicked by producer Andy Bell, have been taken from various venues during the November 2015 tour. Although there is a large overlap between the DVD and CD setlist, most of the recordings are different with only a handful duplicated across both sound and vision.

The sound seems fuller on the CDs than DVD and the audience applause more integrated into the overall sound. The tracks have been mixed with care, enabling the listener to hear things that can be lost in the general hubbub of a live gig. Kelly’s blistering solo in Old Dun Cow or Flood’s manic percussion in Rosemary Lane being two particularly good examples.

There are a couple of rarities too. If You Will Not Have Me, You May Let Me Go has only ever been available on the first Bellowhead DVD, whilst The March Past has never been recorded before. This latter tuneset (consisting of The March Past, Bonnie Kate and Jock Wilson of Fenton) is fast becoming a live favourite.

Sadly, the CD does not contain what will be for many the most poignant song of the night. For their second encore Bellowhead have been covering Richard Thompson’s Down Where the Drunkards Roll. This sombre classic, sung and played with feeling, is the perfect way to end the DVD. The silence when the song ends speaks volumes.

This live package is a fitting memento of a band who, for the past twelve years, have brought so much pleasure to so many people. They will be missed.

Released on 8 April 2016 by Navigator Records.