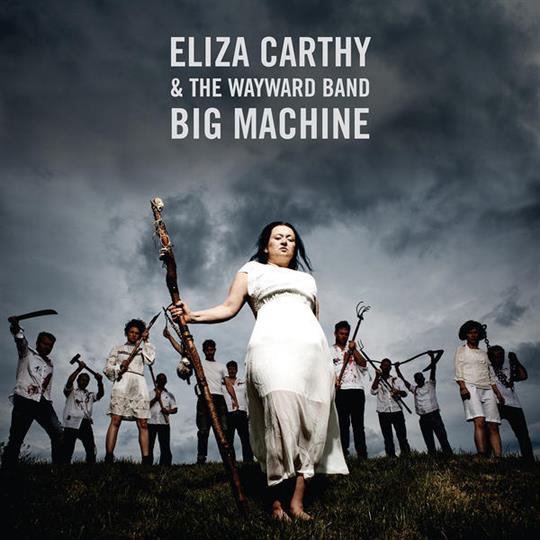 Eliza Carthy first formed the all-star Wayward band in 2013 for an anniversary tour designed to mark her 21 years in folk music. Now, four years later, comes an album which takes the concept of big band folk and pushes it in a new and exciting direction.

It’s inevitable that comparisons are going to be made to Bellowhead, but Carthy avoids this by not only having one more band member than that other ’big machine’ but by using a wider palate of textures and sounds.

The eleven pieces on Big Machine run the gamut from the traditional to the contemporary. Opening with an arrangement of a ballad found in Manchester’s Chetham’s Library the album reels the listener in and doesn’t let go until the final Epitaph celebrating death by custard.

In between these two points, Carthy offers the listener a variety of moods and music. Great Greyback is a stomper of a song with a catchy singalong refrain, whilst Rory MacLeod’s Hug You Like a Mountain has been reimagined as a duet with Teddy Thompson.

MC Dizraeli helps out on Carthy’s song of inclusion, You Know Me. His mid-song rap reinforces Carthy’s theme of welcome and sharing. The fruit in our garden is good indeed.

Arguably the most exciting set on the album begins with a cover of Ewan Maccoll’s The Fitter’s Song. This song swaggers to an accompaniment of rasping New Orleans jazz-style brass and smoking electric guitar. A segue into a vocalisation of Jack Worrel’s Hornpipe then smashes into Love Lane. A monster of an instrumental, this sees the whole band playing as if their lives depended upon it. Play it loud.

It’s a tribute to the producer, Jim Sutherland, that he manages to tame this twelve-headed hydra of a band into something listenable without compromising on clarity or power. He’s equally good at capturing the more delicate moments.

A case in point is the remarkable eight minute version of I Wish That The Wars Were All Over. Performed live at Real World Studios, this has Carthy singing freely against a syncopated rhythm which gives the song a sense of dislocation. Later, Damien Dempsey intertwines his voice with Carthy’s for an elegiac conclusion to this haunting piece.

For an album that could be a mishmash of sounds and instruments, Big Machine is grounded by Carthy’s voice. Her warm, intimate, earthy tone is perfectly suited to the material. In many ways this is Carthy’s album through and through. The first big hit of 2017.

Released on 3 February 2017 by Topic Records.