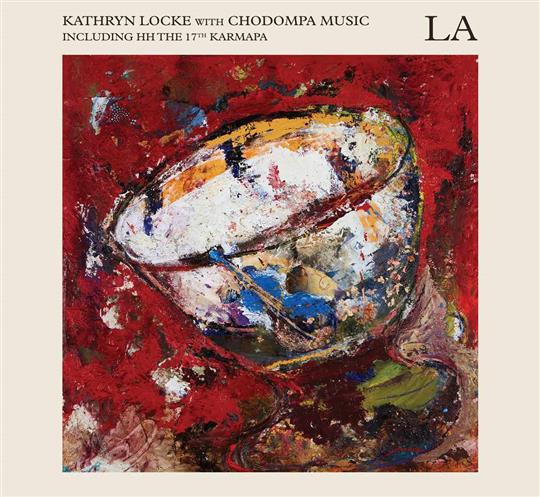 Cellist and composer Kathryn Locke came back to the recording studio with a new band called Chodompa Music, a collective that includes Sarah Allen on flutes, Jo Freya on saxophones and clarinet, Jo May on percussion and balafon and Geoff Coombs on mandola. The result is LA, an album infused with the sounds and the suggestions of Indian and Tibetan culture and musical tradition.

One can feel this album is something different from the first notes of the opener Dancing in the Ancient Dirt. It starts with a light pizzicato intro by Locke’s cello, then Allen’s flute introduces the listener to the main theme of the track and to the peculiar sound of the entire work. The complexity of these band settings is particularly palpable in two tracks: the catchy 7/8 tune Dervish and Locke’s Lope, written in memory of Peter Locke.

The two most surprising tracks are perhaps those in which Locke’s fascination for these territories shines the most with all its imaginative power. A mellow and haunting accompaniment is the backdrop of a musical effort from His Holiness the 17th Karmapa Ogyen Trinley Dorje, who sings an excerpt from Calling the Guru from Afar, whilst Firebear was composed for the 100th birthday of renowned Tibetan artist Sherab Palden Beru, also known as Uncle Sherab.

The Price is the piece in which the mix of English and Tibetan musical traditions that is the trademark of this ensemble finds its most remarkable expression. An evocative composition in which each member of the collective has their own voice for a delicate interweaving of sounds, reminiscent of Himalayan suggestions and of English classical music at the same time.

With its hypnotic atmospheres, mesmerising energy and well balanced settings, LA provides an immersive listening experience and effortlessly manages to portray vivid images of distant lands in the listener’s mind. Kathryn Locke and Chodompa Music have coherently put together an unpredictable number of diverse emotions and styles; it will be interesting to see where this newly born but already mature musicianship will go next.

Released on 1 May 2021, produced by Kathryn Locke and Neil Ferguson