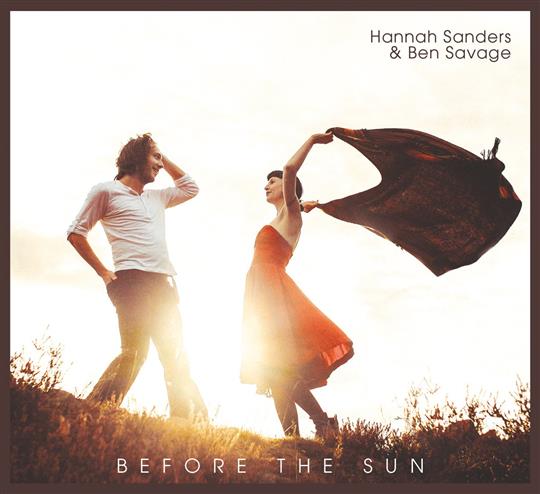 The follow up to Hannah’s Charms Against Sorrow debut, Before The Sun retains the hallmark of a familiar Sanders fragility whilst adding the dobro, guitar and voice of Ben Savage.

Emerging as one of those duo combinations that’s been described as a soul-mate relationship, musically speaking of course, they do seem a partnership who bring out the best in each other whether delivering covers, the traditional or their own work.

Producer David Travers Smith also plays his part in helping define that special quality and intimacy - in the light of which, a simple five word summary might read “an intimate and gossamer delicacy.” It comes about as a natural progression from them playing together in support of her debut and also from their live sets as a duo which see the closeness of working round a single microphone reproduced on record.

Before The Sun has been brought together from the traditions on both sides of the Atlantic, particularly in the melding of the two voices into signature duets which showcase Hannah’s trademark clarity and purity.

Contributions from Canadian Kevin Breit and Evan Carson as well as names more familiar to folk at home, Jim Causley, Katriona Gilmore and Jade Rhiannon suggests a bigger band sound yet their contributions are subtle enough as to be barely noticeable and allow the Sanders / Savage duo to shine through.

In fact, aside the covers and the trads, it’s a couple of Savage / Sanders originals - The Fall (Hang and What Is It Tonight My Love- which provide the highlights. The former opens the album boldly setting the scene with a less is more approach which is both beguiling and breath haltingly precise in spite of the darker subject matter. The latter a fine example of the Savage vocal sitting just below the surface, occasionally emerging to make itself known before dipping back.

Their take on Lady Margaret stands in complete contrast with Jim Moray’s recent orchestrated version, this one stark and bare yet for another contrast, Clayton Boone is a perfect example of the areas they move into with slowly building lush harmonies.

The very traditional Unquiet Grave (covered in various guises by everyone from Joan Baez to The Dubliners to Prog Rock king Steven Wilson) and more contemporary with Dylan’s Boots Of Spanish Leather close the album, again emphasising the theme of contrasts.

Ultimately, listeners will be left with the feeling that Before The Sun conjures up a airy, light and translucent flavour which disguises an unanticipated depth.

Released on 16 September 2016 on Sungrazing Records.