Katriona Gilmore & Jamie Roberts - A Problem Of Our Kind 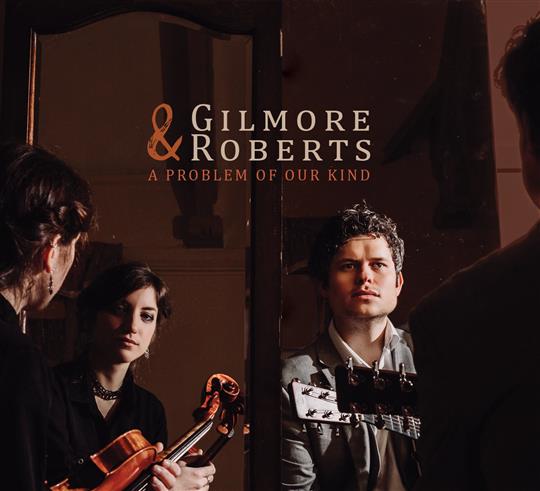 The duo’s first new material in three years, co-produced with Ben Savage, who also plays dobro. It’s all self-penned material, save for the album’s closing number, Jamie Roberts’ fingerpicked arrangement of the Irish air From Night Til Morn.

Katriona Gilmore provides opening track with The Gauntlet, a lurching, drum and plucked-violin heavy number inspired by an 1818 Warwickshire murder trial in which bricklayer Abraham Thornton was accused of drowning Mary Ashford. He was acquitted and her brother, William, launched an appeal. Thornton, however, invoked the ancient right to trial by battle and, realising he had little chance of winning, William did not take up the challenge.

Roberts’ nimbly fingerpicked guitar and melodeon accompanies The Philanthropist (Take It From Me). The song is also based on a real life character, the octogenarian Lambeth businessman Laurie Marsh, one of the world’s most successful entrepreneurs who gave away his multi-million pound property empire to charitable causes because he didn’t like the person it was turning him into. Sung in the first person, with a ’hey diddle um a dee’ traditional touch, it charts his rags to riches life from a difficult birth to making a killing in property and deciding his wealth was better suited to supporting the arts.

Indeed, the inspirations behind most of the songs lie in real life settings or people. Delivered with a fiddle-driven, strident heavy folk rock urgency, The Smile & the Fury is based on a photograph of a young female protestor confronting an EDL member at a Birmingham rally armed with nothing more than a smile.

In contrast, adopting a suitably melancholic acoustic approach, the Richard Thompson-esque On The Line was written after hearing about trains being delayed because of a suicide, prompting a meditation on the few who placed their inconvenience and financial loss above common humanity. Gilmore brings a personal resonance to the country-tinted fiddle and dobro shaped Things You Left Behind, a tribute to her late aunt with lines like “you were the easiest to be with, that’s what makes you hard to lose” likely to bring a lump to the throat.

A rather more unusual source lies behind Gilmore’s All the Way to Rome, the American Horror Story TV series inspiring a slow waltzing song about disillusionment with someone once placed on a pedestal, but who was ultimately prepared to sacrifice others to save themselves. It shares a thematic connection with Bone Cupboard except, inspired by a Margery Allingham novel, this is about not wanting to know another person’s any dark and hidden secrets, the lyrical mood complemented by the sparse arrangement with Katriona on lead vocals set to a muted drum thump and work song-like handclap percussion.

The remaining Roberts number, Average Joe, again echoes early folk rock Thompson through its lament for the ordinary working man enduring the daily grind, always taking the path of least resistance and jumping through hoops rather than taking a chance and risking failure. It’s the punchiest, most crowd-friendly track on the album, but the stand out number has to be Gilmore’s infectiously lively Just a Piece of Wood, quite possibly the only love song ever written to a violin, the one that’s shared her life and leaned on her shoulder for the past twenty years, as she wonders on its past and future lovers.

Their most accessible album yet, perhaps this is the year they turn those Folk Awards nominations into a win.