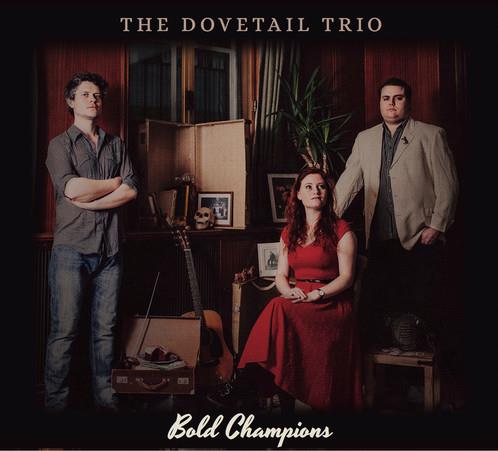 Bold Champions is the second release by English folk group The Dovetail Trio. Jamie Roberts (guitar and vocals), Rosie Hood (vocals) and Matt Quinn (duet concertina and vocals) recorded eleven of the twelve tracks on this album in an early Victorian schoolroom on the hills surrounding Sheffield; the last one was recorded during a live gig. The material they selected for their new release is made up of traditional songs, mainly English, ranging from medieval chivalry tales to romantic pieces of writing.

The album kicks off with the well known The Light Dragoon before moving to Black Eyed Susan: their a cappella interpretation of this song based on a poem written in 1720 by John Gay is airy and charming. The Bold Keeper is the track in which Quinn’s concertina shines the most and is an always-valid warning for nosy parents to avoid interfering with their childrens’ choices.

The trio also perform a gloomy version of Death and the Lady, a medieval song based on a theme well-known across Europe that also inspired Egon Schiele to paint the scene: another a cappella arrangement, another jewel. The Wreck of the Northfleet is a tribute to the 320 victims of the unpunished massacre of 22 January 1873, when an out of control Spanish steam ship crushed into the side of a British vessel not far from the coast of Devon. The live track that closes the album is Four & Twenty Fiddlers, an exhilarating nonsense song that leaves the listener in a hilarious mood.

If their first album displayed the individual skills, this second one showcases a more mature ensemble sound, especially the immersive vocal harmonies they produce in the a cappella tracks really catch the ear and makes the listener hum along after the album ends. A special mention has to be awarded to Quinn’s concertina, not only for his contribution to The Bold Keeper, but also to The Two Sisters and to the title track in which his delicate playing makes everything, if possible, more fluid and warmer.

Listening to Bold Champions, there is an immediate perception that there has been a great effort to take these evergreen classics of British folk music and to make them sound this way: those stories of tragedy and love, of brave men and lively ladies are some centuries old, but they sound fresh and crisp in the hands of these young musicians.

Released on CD and digitally on 31 May 2019. Produced by Tom A. Wright and The Dovetail Trio