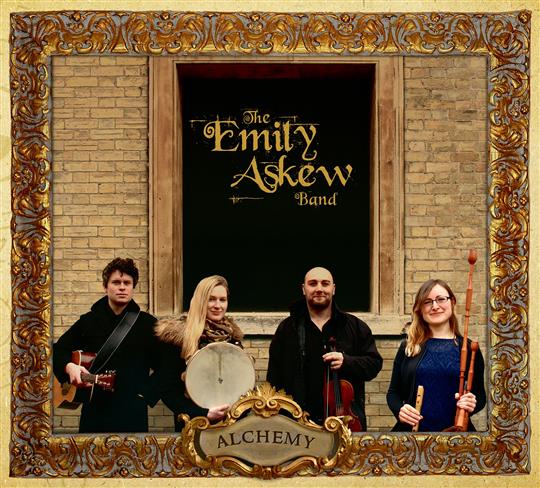 It’s a quirk of musical development, that English "folk" dance and song from the 18th century on is today viewed as a living and malleable tradition where tunes and words can be adapted and altered to fit in with a wide variety of more modern instruments, styles and sensibilities. Meanwhile, its predecessor, "early" music from the medieval and renaissance periods, is to a large degree still performed on period instruments, to scholars’ best approximation of how they would have been centuries ago.

With substantial experience in both fields, Emily Askew attempts to apply the approach of modern folk musicians to early music repertoire on Alchemy, her debut solo release. In this, she’s ably assisted by John Dipper on fiddle and viola d’amore, Jamie Roberts on guitar, and Louise Duggan and Simon Whittaker on percussion.

On opener Bransles, from 16th century France, the band play with enough lift to get across that these tunes were originally composed for dancing, rather than academic perusal. Like much of the album, it is underpinned by strummed guitar chords from Roberts, an instrument and style of playing that wouldn’t have existed in that form when the tunes were written, but which fits them naturally nonetheless.

Alchemy still takes time to capture the sense of pensive melencholy that is one of the characteristic moods of early music. There’s the spacious harp-based arrangement of 13th century French song Amors M’art, the serene string harmonies at the start of Cantiga de Santa Maria 42, and some suitably austere viola d’amore chords that introduce Winter.

There’s also some decidedly modern touches. O Virgo Splendens layers up strings, bells, and synthesised contrabass, while glitchy electronic effects provide the transition into Guiseppe, which to all intents and purposes sounds like another ancient tune, before a quick examination of the sleeve notes shows that it was in fact written by Askew herself.

And to close the album, there’s Roberts giving a hearty rendition of feelgood number Begone Dull Care, followed by the band tearing into Playford tune Maiden Lane in equally rousing fashion. Which, like much of what’s on Alchemy, is the best way to showcase this centuries old material: not as a hermetically sealed period piece, but as music that’s able to stand up in a variety of settings across the ages.