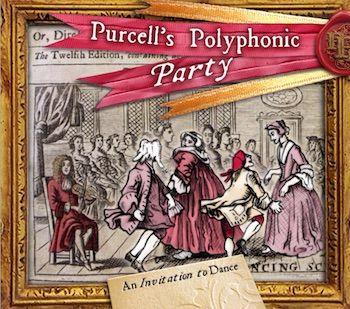 Purcell’s Polyphonic Party is a trio specialising in music from the Baroque era. As the title of the album implies, the music is meant to be danced to, but it is also a treat for the sendentary tune lover. The trio frequently lead dances and have put notes on introductions, repeats and speeds in the sleeve notes.

Whilst it is music for dancing, it is all delivered in a sedate and dignified manner, as was the custom at the time. The tunes are taken from Playford’s Dancing Master and other contemporary sources, with some pieces having additional material by Jonny Dyer or John Dipper.

The choice of instruments is interesting, and not entirely typical of the Baroque. Vicki Swan brings an other-wordly sound to the group with her nyckelharpa and Swedish bagpipes as well as the more conventional flute, recorder and double bass. Jonny Dyer also plays a range of instruments - the harpsicord was a mainstay of Baroque music, while the citole was already largely out of use by that time. He also plays guitars, bouzouki and piano here. John Dipper adds another typically Baroque instrument - the viola d’amore.

With so many instruments available, the players are able to hand the melody from instrument to instrument like the baton in a relay, or weave in and out of each other creating a rich tapestry of sound.

Each tune has its own distinctive flavour with different instruments featuring. For example the Swedish bagpipes in Mounthills, or the harpsicord in Upon a Summer’s Day.

The album opens with a tune familiar to many, the 3/2 hornpipe Dick’s Maggot, with the main melody played partly in canon. It is followed by Jacob Hall’s Jig, which is not the energetic dance one would expect but rather more stately and even sounds quite mournful at the beginning.

Emperor of the Moon features the piano, and transports the listener to the dances that are a feature of Jane Austen’s novels. In Terpsichore (named for the goddess of dance and chorus) we hear that much maligned instrument, the recorder. Here it is played beautifully of course.

Softly Good Tummas has an almost Middle Eastern sounding intro which has an improvised fee,l before setting the pulse for the entry of the nyckelharpa. The tune goes through several changes in mood as different instruments dip in and out.

An Invitation to Dance is an utterly charming album which will take you on a musical journey back in time.