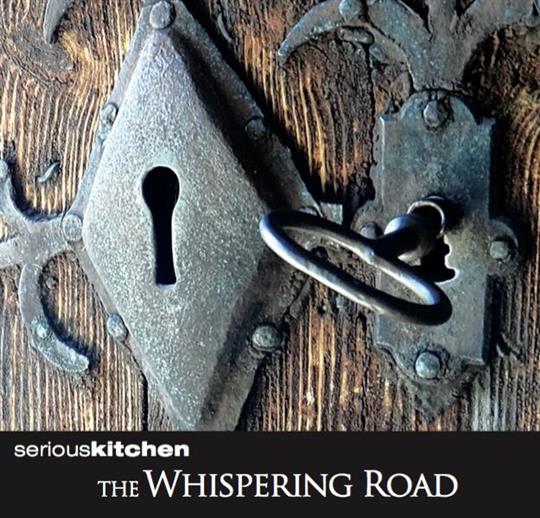 Vicki Swan, Jonny Dyer and Nick Hennessy are SeriousKitchen, joining together to tell the story of a quest to find the owner of a ring. The Whispering Road combines elements of two stories, “The Ring” written by Helen Nyblom in 1897 and “The Giant with no Heart in His Body”. Both stories have their roots firmly based in Scandinavian folklore.

The music and story-telling are inextricably woven together so it is impossible to analyse the album in terms of individual tracks. It must be treated as a whole and the track listing on the sleeve merely tells you which music has been used.

All three members of Seriouskitchen are accomplished musicians, and you will hear the nyckelharpa, kohorn (cowhorn), accordion and guitar on this album as well as some fine three-part harmony singing.

The opening music is the traditional tune Långdans från Sollerön combined with a lovely three part composition by Nick, Seek Me Find Me. The tune and song weave in and out of each other with the other-worldly sound of the nyckelharpa creating a sense of mystery. And so the story begins, told expertly by Nick. The song returns several times throughout the story.

The nyckelharpa and guitar depict the journey made by the Prince in the story with a traditional tune called Härjedals Schottisch. It reflects the excitement of the beginning of the quest, and also makes several appearances as each stage of the journey begins.

Sometimes the instruments create sound effects rather than music - the rattling sound which leads the prince to the ring is represented by high strings, but this gradually becomes a tune, painting an audio picture of the ring dancing on its chain.

Half-way through the story, the pace slows down as the nature of the quest changes. The Prince is wearied by his travels, and Dew Drift Frost Fall, written by Nick and Jonny drifts gently into the narrative. However, it is not long before the story changes direction again and the next stage of the quest is marked by Nick’s song Love is Lost.

The ring’s tune makes another appearance in the form of a bird, and this heralds the return of spring as we approach the inevitable happy ending, accompanied by the joyous tune Polska efter Byss-Calle No. 32.

The Whispering Road is a masterpiece of musicianship and storytelling. Make sure you have time to listen to it in one sitting - it demands your full and undivided attention.