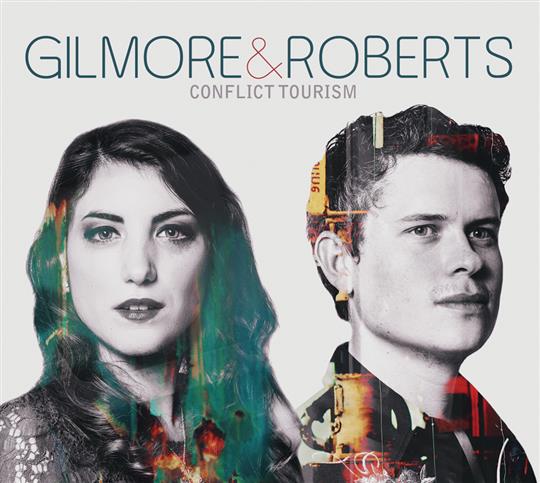 Conflict and Tourism are two words you would not expect to find together, but they form the perfect title for this album in which Katriona and Jamie explore different types of conflict. The album consists of eleven original compositions in which they both showcase their talent as songwriters. They are joined on most tracks by Matt Downer (double bass) and Mark Tucker (percussion, drum programming). Phillip Henry plays lap steel on one track.

Katriona (fiddle, mandolin, vocals) and Jamie (guitar, vocals) have developed a distinctive punchy sound which is much in evidence on their latest recording. Even in the opening track, Cecilia, with its minimalist accompaniment, one can feel the energy driving the tune along.

Jamie draws on folklore, local history and personal experience for his songs. Jack O Lantern is a sinister song inspired by the tradition of making pumpkin lanterns for Halloween. The rocky Peggy Airey tells of a superstition surrounding Margaret Maggott - people believed they would have good luck if she greeted them at Christmas. Peter Pan is a tribute to a cousin taken too young by cancer. Jamie’s song Balance/Imbalance is particularly poetic, exploring opposites. The arrangement is almost a cappella, with a dark opening.

Katriona also draws on history in her song Stumble on the Seam, about several generations of a family trying to find a lost seam of the blue john stone. Their signature style is very much in evidence here, and is particularly exciting when the song tells of the re-discovery of the seam. Katriona also has a knack for writing tear-jerkers, and there are two on this album: She Doesn’t Like Silence and Ghost of a Ring. The former features a dramatic instrumental break with a soaring fiddle solo.

It has been a while since Gilmore and Roberts have released an album, but Conflict Tourism has definitely been worth waiting for.