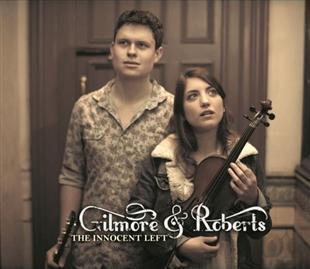 The Innocent Left is the new release from Gilmore & Roberts and they’ve moved to Navigator Records and upped the production considerably.

Most of the stories are original creations with personal meaning, the only traditional track is a wonderful version of False Knight, on which the vocal harmonies are pretty haunting whilst the instrumentation builds up adding to the drama of the tale.

The stand out tracks on the album are Doctor James and The Stealing Arm. Doctor James is about a 19th century doctor with a scandalous secret and has a boisterous chorus and a lovely delicate mandolin part which plucks along nicely. The chorus of the final track The Stealing Arm is even more rousing and shamelessly cheery considering the fact that the song is basically about kleptomania and capital punishment - ending the album with an absolute bang.

Their own creations exhibit beautifully written lyrics, Shuffle and Deal is one of the most lyrical songs about cards. Whilst Letters is incredibly personal telling the story of a mother working for the world service during the second world war and convincingly conveying the worry of a mother who is missing communication with her son.

Another sad lament is the track Louis was a Boxer. A story told about a man who was a regular in a sandwich shop Roberts worked in whilst at university. It not only tells a great story but also features a quietly rich flugel horn - brass instrumentation can be a great addition to almost anything - which actually works beautifully with a delicate guitar and string part.

Seven Left for Dead and Over Snake Pass are the only completely instrumental tracks. Seven Left for Dead is fabulously energetic with great string parts and a rolling energy and swinging drum beat sure to get feet tapping. Over Snake Pass certainly sounds like the Snake Pass feels. This album features incredibly strong instrumentation on every track which is lovingly arranged to showcase the musicians talents and their own skills in arrangement.

The release publicity describes The Innocent Left as a ’powerful wall of sound’ but that doesn’t give the softer moments the recognition they deserve. It has its powerful wall moments but also often displays an affectionate delicacy not frequently met with. Silver Screen especially displays a wonderfully intricate sound.

It is an album of contrasts in sound from track to track but it really does work. It’s an absolute joy and the album really demonstrates their passion for telling brilliant stories. The Innocent Left is ample proof that this exciting duo really deserve their growing reputation.