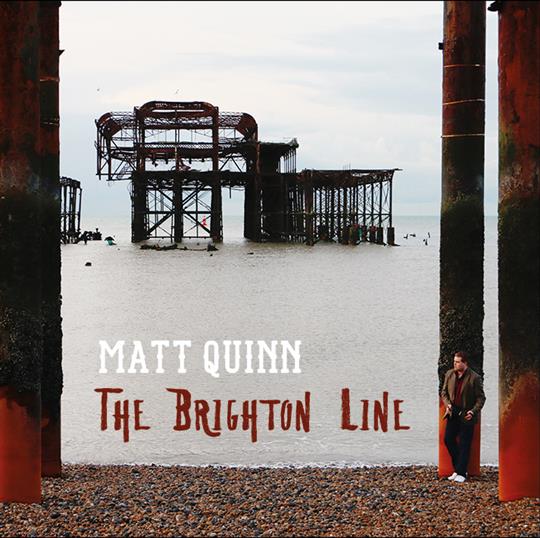 Matt Quinn can trace his heritage, on his mother’s side, back five generations to the mid-19th century, and throughout this time the family has lived and worked in Sussex. It’s no surprise, therefore, that the concertina player of the successful Dovetail Trio has chosen to create his new solo album entirely from traditional songs of that area, and named it for his hometown: The Brighton Line.

It is an interesting choice to open the album with Canadee-I-O, a song interpreted so many times over the years that every listener will have a favourite version to compare. While Quinn’s version features some very fine concertina playing, it lacks something of the sparkle of Nic Jones’s legendary rendition.

There are two great joys of this album, the first of which is Quinn’s reliably excellent concertina and mandolin playing. He has proven his credentials with the Dovetail Trio, both in the studio and in live performance, and there is plenty to enjoy here as well.

The Lakes of Coalflin, originally an Irish tune, but collected from Uckfield-based pub singer Scan Tester, is particularly brilliant in this respect, as is Sweep Chimney Sweep. In contrast, there are also a host of unaccompanied numbers on the album.

The other delight is the pleasure of discovering new songs, and of rediscovering old ones. This album is perhaps best considered as a record of the Sussex folk tradition, rather than a performance piece, and while none of the songs are entirely unknown, several are rare enough that nearly every listener will find something new.

That being said, perhaps the finest performance is saved for last, on a song well known to many, with an enjoyable rendition of The Golden Vanity.

The Brighton Line, then, is an engaging collection of songs, with simple, unembellished arrangements allowing the history of the music to shine through. This, combined with superb concertina contributions, create an album with plenty to give.

1. Canadee-I-O
2. The Poor Weaver’s Daughter
3. A Bricklayer Bold
4. The Lakes of Coalflin
5. Down By the Seaside
6. Deep In Love
7. Sweep Chimney Sweep
8. Riding Down to Portsmouth
9. Butter and Cheese and All
10. The Plains of Waterloo
11. The Golden Vanity