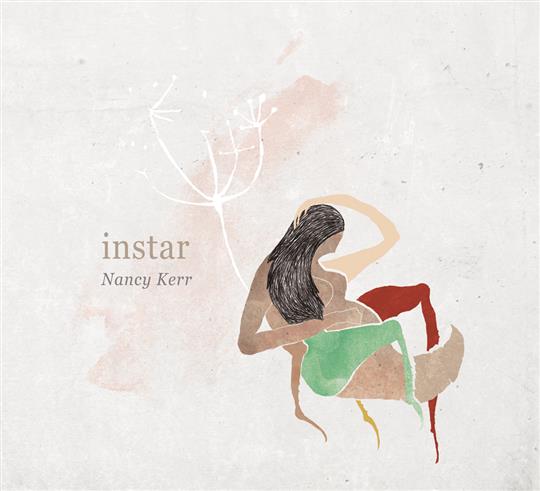 Nancy Kerr is rapidly becoming one of Britain’s most well regarded folk musicians, and with the quality of those who join her on her most recent album, Instar, expectations are high. Kerr is again playing with her Sweet Visitor Band, which includes such folk stalwarts as James Fagan and Greg Russell, among others.

From the beginning, the album does not disappoint. The title track, which in Kerr’s own words discusses “transience and rebirth”, brilliantly sets the scene for what is to follow. It is relaxed, and led by Kerr’s gorgeous, crystal clear voice, but always manages to keep the listener’s attention. As with the rest of the album, the contributions from the band are excellent, with guitar playing from Fagan and producer Tom Wright particularly wonderful.

The album continues in much the same vein, with Kerr’s voice heart-wrenchingly beautiful throughout, backed by perfectly pitched accompaniments from the band. Kerr’s lyrics on this album are also fabulous - adventurous, interesting and thought provoking. She is at her best writing about challenging topics, and she certainly doesn’t shy away from them here.

A real highlight is Farewell Stony Ground, a look at urban poverty hidden behind a light-hearted tale of a fraudulent car park attendant, which also features great instrumental contributions from Russell on guitar and Kerr herself on violin. Similarly excellent is Written On My Skin, about two sexual assault victims fighting to have their cases fairly tried.

Continuing with the difficult topics, the marvellous Fragile Water takes a sideways glance at the issues surrounding gender fluidity, backed by the excellent banjo playing of Rowan Rheingans. Kerr goes on to address the destruction of habitats (Kingdom), colonialism (Adieu My Love), and austerity. The last of these comes in what might be the album’s finest track, Gingerbread, an upbeat look at hard times inspired by a medieval recipe for gingerbread which contained no ginger.

Perhaps the only criticism which could be levelled at this album is that the songs are all somewhat similar, but when they are this good that certainly doesn’t matter. For every song mentioned in this review, there are more just as good - Light Rolls Home, Crow’s Wing and Sisterhood are all good enough to justify buying the album on their own.

Overall, Kerr’s unorthodox, intriguing song writing, captivatingly beautiful voice and fabulous band make Instar an absolute masterpiece which is not to be missed.