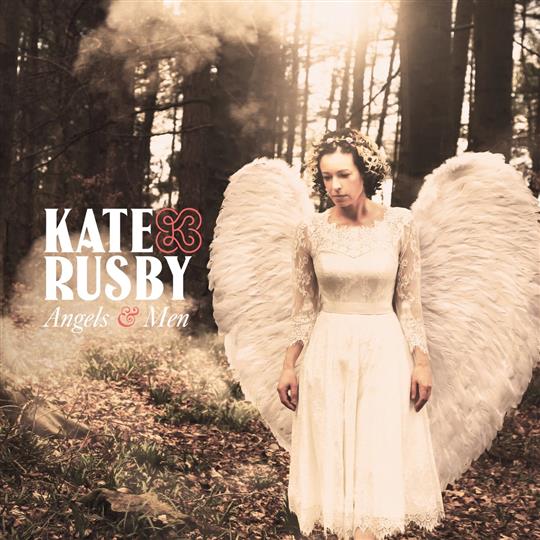 These days there are lots of reasons to look forward to Christmas, not the least of which is the prospect of another set of seasonal songs from Kate Rusby. Clearly on a mission of bringing cheer and goodwill to all men, her Christmas diversions are becoming part and parcel of our Christmas expectations as the nights start to draw in and we prepare to roast our chestnuts on an open fire.

Rounding off twenty-five years in the business (for the record, fifteen studio albums and three Christmas albums plus countless touring bouts) Angels & Men once again finds Kate Rusby combining traditional South Yorkshire songs with some enchanting covers and originals and to the delight of many, the latest in the escapades of Big Brave Bill.

While her first couple of Christmas albums might have been seen as charming little diversions, there’s now an expectancy of what’s becoming a Christmas tradition.

Once again, the warmth of the brass arrangements invokes an immediate seasonal quality, yet the breadth of the sonic palette of her more recent work also impacts upon Angels & Men. A result maybe of Damien O’Kane taking on production duties as well as adding his distinctive banjo and electric tenor guitar and the presence of Duncan Lyall’s moog, matching the depth and quality of Life In A Paper Boat.

Ron Block guests on banjo and combines with Sierra Hull’s mandolin on Santa Never Brings Me A Banjo, introduced with O’Kane and daughter Daisy’s brief Banjo Banjo in a, you’ve guessed it, banjo-themed interlude.

Like opening the first door of a musical advent calendar, the jolly bounce of Hark Hark leads the way for a musical variety that proves a similar patchwork. A popular choice for 2017 is Richard Thompson’s We’ll Sing Hallelujah, also covered on O’Hooley & Tidow’s WinterFolk. Let It Snow and Deck The Halls follow the trad. carol route along with another of the plethora of South Yorkshire takes on While Shepherds Watched in Sweet Chiming Bells

Anyone heading to the now traditional Kate Rusby at Christmas shows can expect a Christmassy indulgence of bells (sweet ones at that) and shepherds. Talking variations, The Ivy And the Holly (see what’s been done there?) is Chris Sugden’s song taken on with a more basic three piece accompaniment.

A trio of songs soon rise to provide icing on the (Christmas) cake moments, led by Paradise, which in ambience and texture sits as a close relation to Life In A Paper Boat’s Benjamin Bowmaneer.

See Amid The Winter Snow floats on Damien O’Kane caressing those electric tenor strings again and then picking out cascades of ringing notes; a key feature of the contemporary Rusby signature.

These are tasters before raising the bar again with a brand new song, Let The Bells Ring, one that’s going to rank as a major song in the canon. A reflection on the sadness of the end of another year, yet with the prospect of new beginnings taking with us “what makes your heart glad.” Listen carefully and there may even be a hint of O’Kane adding a vocal presence.

As Rusby herself says, “Put it on, turn it up loud, hand out the mulled wine and sing, sing, sing!”