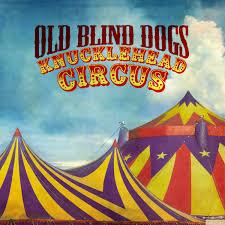 Knucklehead Circus is the fourteenth album by legendary Aberdeenshire based band Old Blind Dogs, a twelve track release conceived to convey the thriving energy of the quartet’s live performances and to be a source of joy and optimism during these troubled times.

As everyone who has come across their music would expect, the album is a mix of songs and instrumental tracks, of old sources and modern material. Hence tales of folklore, or inspired by historical facts, such as John Barleycorn or Harry Brewer alternate with lyrics infused with social comment like Farewell tae the Haven and Here We Go Again, all proofs of the storytelling skills that the band, in its various line ups, has acquired during 30 intense years of experience.

The bold approach this collective has always had with traditional music is well reflected also in the instrumental tracks on this album. Take for example the title track that opens the album, the ever changing final suite Highland Lassie, divided into two parts, or the spectacular rendition of Gordon Duncan’s Thin Man. All delivered in pure Old Blind Dogs Style, that sound that, despite slightly evolving from the band’s first album back in 1992, has always been remarkably inventive.

Apart from a few slow or moderate paced passages such as the first take on the title track’s first tune and the first half in Akins, this release is packed with fast and jowly tunes and of course displays a remarkable level of instrumental dexterity without getting repetitive.

With Hardie’s versatile singing, Hutton’s virtuoso piping and whistle playing, Jones’ recognisable cittern and guitar substrate and Hey’s avant-garde percussion, this album is exactly what the quartet wanted it to be; an upbeat and uplifting musical experience conveying the emotions and the vivacity of their live gigs into our living rooms.