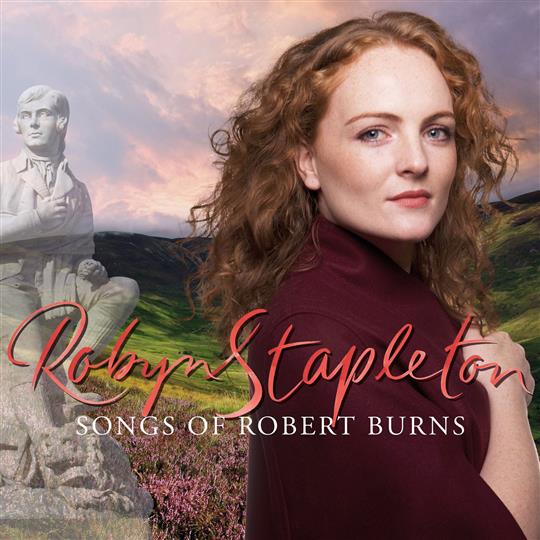 Songs of Robert Burns is the second solo album from Robyn Stapleton, featuring the young singer performing the works of Scotland’s most famous poet.

After winning BBC Scotland Young Traditional musician in 2014, and releasing the excellent debut Fickle Fortune in 2015, Stapleton’s performance on Songs of Robert Burns shows that she can consistently put out great records featuring very fine singing.

The opening track, Comin’ Through the Rye, is a glorious opener. The very first thing one notices about Stapleton’s singing is the emotion she conveys through her voice. Often when that’s written about folk singers it refers to pain, sadness, etc. But one can practically hear Stapleton grin while she sings, and it’s tough not to join her. Interspersed with the verses is the brisk tune An Cuan, written by James Ross and played with great lightness by Patsy Reid on fiddle.

The second song, Westlin’ Winds, is a much more restrained, serene affair, though Stapleton’s performance is no less emotive nor enthralling. It’s probably more reflective of the rest of the album than Comin’ Through the Rye.

The Slave’s Lament drops the serenity for something altogether more chilling and haunting. Aside from Stapleton’s singing, it’s also a very effective arrangement, with Reid’s simple viola accompaniment emphasising, but not distracting from, the mournful vocals.

On that same thread, John Anderson My Jo is a pleasant a capella surprise, giving one the opportunity to really give full focus to Stapleton and appreciate her clean, clear voice.

It’s unlikely that Songs of Robert Burns will inspire many revelations in how listeners view Burns’ works, but that doesn’t stop this being an excellent collection of music. Besides, there’s certainly something to be said for the merits of following the spirit of Burns’ work rather than trying to reinvent or reinterpret it.

This album is a collection of undeniably fine lyrics, delivered through beautiful singing and brilliantly tailored instrumentation.

Released on Laverock Records on 20 January 2017