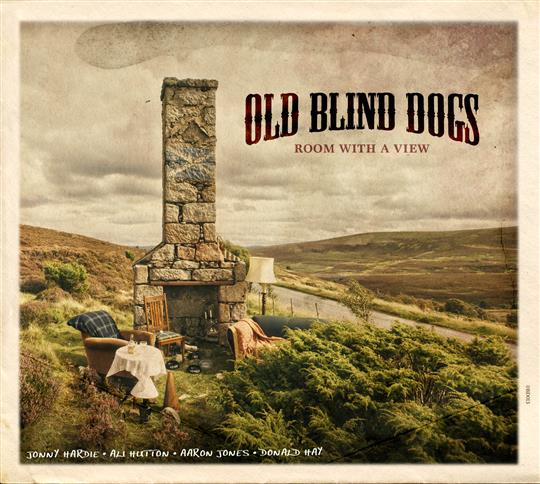 Old Blind Dogs have been performing for some 25 years, and their new release, Room With A View, is a fresh, spirited, yet mature powerhouse of an album. Their first recording in over six years, it is a real cracker.

Earl O March’s Daughter, an historical tale rewritten in song by the late, great Lionel McLelland, is one of the album’s many highlights. Atmospheric low whistle, fiddle and bouzouki accompany touching vocals which convey a real sense of emotion in this Scottish story of love and life lost.

Nevertheless is a joyous set of three jigs each of which showcases the band’s skills and musicianship, from the interlinked precision fiddle and bouzouki playing in Billy Rush’s, through the atmospheric low whistle in Nina’s Jig and culminating in the driving power of Hutton’s mesmerising pipe playing in the fantastic The North Star.

Napoleon does not fare well in the retelling of the traditional song Warlike Lads of Russia. A somewhat merry tune with infectious melody and rhythm, it recounts Bonaparte fleeing the battle and leaving his men to be defeated by the Russian forces. Sawney Bean, however, tells a rather dark and more sinister tale where the low whistle and fiddle create a menacing backdrop for this strange Scottish story.

Old Blind Dogs clearly draw much inspiration from Scottish traditional tunes and songs, however in their music other influences are also evident. Bunker Hill has a very traditional Scottish feel with pipes, fiddle and low whistle interweaving and complementing each other whilst bouzouki and percussion provide the driving beat and rhythm building into a steam train of a tune with distinct bluegrass, country overtones.

Room With A View brings together traditional songs and tunes with those that are newer but which sit and balance squarely with tradition. Each is arranged and performed expertly by a band who are masters of their trade, honed over years of recording and performing. The pace and sheer complexity of some of the playing will leave you gasping, whilst other gentle harmonies and accompaniments will leave you touched.

This album that will move you emotionally and of course physically... as you get out of your chair to dance along to those fantastic jigs and reels!