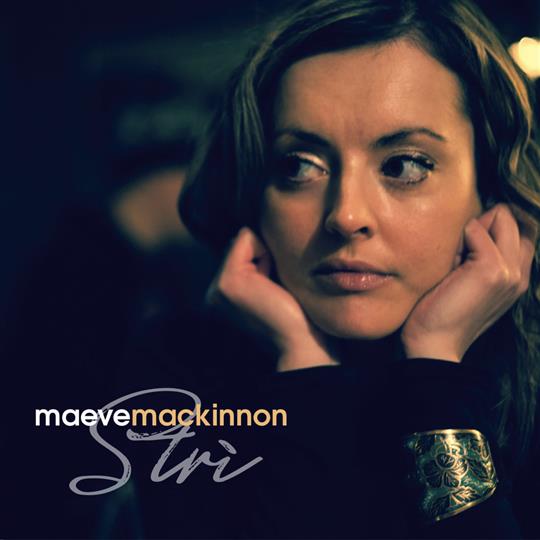 Strì, the third studio album by Scottish singer Maeve MacKinnon, is a collection of songs of love, loss, tragedy and rebirth, mainly in Scottish Gaelic. Almost every song displays a moment of a woman’s life from her point of view. A powerful line up of renowned musicians collaborated to create this amazing album under the supervision of bassist and producer Duncan Lyall.

MacKinnon’s voice seems to take the listener by hand on the green banks of a Scottish loch in the opening track, Iomaraibh Eutrom, with the skilful support of Ali Hutton’s low whistle and Patsy Reid’s strings. Love songs tend to be not so happy and the ones in this album prove no exception. Roìnìn Dubh, Dh’fhalbh mo Rùn air an Aiseig, Moch an Diugh/ Puirt-a-beul and Ailean Duinn, O Hì Shiùbhlainn Leat are all old songs about women’s love that are, in some ways, obstructed, bringing the main character of each song to a different feeling of desperation, loss, anger and hope.

Bodachan a’ Ghàrraidh is a merry wedding song that thanks to clever arrangements and line-up choices brings a more cheerful mood than the previous tracks, while staying consistent in style. We’re Not Staying is the only song in English on this album. It depicts, through the naïve eyes of a six years old child, the story of a South American family that flees to Peru with the evergreen hope to return to the place they call home.

You do not need to be a Gaelic speaker to appreciate this album: both the great number of well-paced waulking songs and the charming atmosphere provided by the convergence of MacKinnon’s voice and Lyall’s guidance perfectly sets the songs in the Highlands of Scotland and this transmits through every single ripple of the album to a delighted listener.

Not only do these songs describe the emotions of those hardy women, but also portray them as keepers of collective memory and humanity. The more you listen to it, this fascinating collection of womens’ stories will definitely bring you to the Highlands, and the Highlands to you.

Self released on CD and digitally on 2 February 2018, produced by Duncan Lyall.