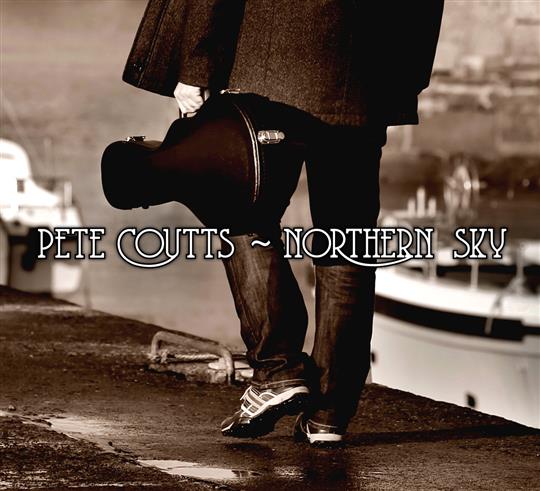 For over ten years Pete Coutts has been a mainstay of the Aberdeen folk scene. He’s been performing with such bands as Catford and Ballad of Crows but in all that time he’s never released a solo album.

It’s a pity he had to wait a decade to put an album out as, on the evidence of Northern Sky, we’ve been missing out on a singular talent.

Not only has Coutts written ten of the eleven tracks on Northern Sky but he plays a mean mandolin and possesses a fine warm voice eminently suited to the subject matter of his songs rooted, as they are, in the traditional life of North-East Scotland.

Alternating tunes with songs, this is a lively album full of driving rhythms and hummable choruses. The first two tracks Allathumpach and Sail & Oar provide the template for much of the album. The former a toe-tapper of a tune, the latter a richly drawn portrait of the North-Eastern fishing community.

Of course, having such musicians as Ali Hutton on pipes and whistles, Jonnie Hardie on fiddle and Brian McAlpine on accordion in your band is a distinct advantage. These three gentlemen, along with many other fine players, add texture and colour on such pieces as Villa Rose (all shuffling beats and long-limbed melody lines) and the delightfully named, Boink!

The songs are just as interesting and arresting as the tunes. Bellhavie tells of a dreadful accident that took place near the eponymous village, whilst Will Ye Byde is a deeply felt ballad finely sung by Coutts above a shruti accompaniment.

Northern Sky is a simple and unpretentious album that shines a light on the cultural traditions and heritage of the Scottish North-East that will appeal to all who admire a tale well told and a tune well played. Pete Coutts is a talent to watch.

Released on 4 October 2016 on Fitlike Records.