Honey and the Bear - Made in the Aker 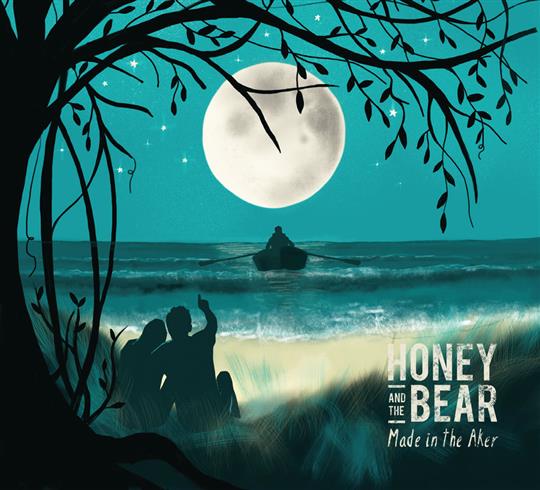 The debut album by Suffolk-based multi-instrumentalist duo Jon and Lucy Hart, augmented by percussionist Evan Carson, cellist Graham Coe and fiddle player Ciaran Algar from Sam Kelly’s Lost Boys alongside Toby Shaer on any number of things and Archie Churchill-Moss on melodeon, Made in the Aker takes its title from an East Anglian term for a turbulent current.

The all original material features Lucy on ukulele. The album opens with the rhythmically pulsing, fiddle-scraped Dark Heart, a cheery number based on a local myth about a woman who tore out her own heart in grief over a drowned lover, her ghost haunting Dunwich beach and the now-cursed driftwood. With Shaer on whistles, they strike a lighter musical and lyrical note on The Ferry, a scampering celebration of a ferry across the river Blyth and the family generations that have operated it.

Indeed, local lore and legends inform several numbers. The rhythmically urgent, percussive Margaret Catchpole, with Jon on lead, tells the true story of a horse thief who was transported to Australia. Meanwhile the spooky harmonies of the drum rumbling, cello-bolstered River Man uses the force of tidal waters of the Suffolk coast as a metaphor for battling against life’s ups and downs. The tumbling fingerpicked acoustic Tin Tin was inspired by the hovercraft inventor Christopher Cockerell supposedly having tested the prototype at Oulton Broad, a contraption made from a vacuum cleaner and cat food and coffee tins.

Coffee is also at the heart of the darkly sweet and spare brooding slap percussion and bazouki-shaded tones of One More Pour, inspired by a plantation in Cuba, society’s java addiction and the ongoing controversy of the trade’s modern slavery that feeds it. Accompanied by whistles, harmonium and double bass, they also extend beyond their Suffolk horizons on the waltzing Tinker, albeit just to Norfolk and memories of a tree house from which they could watch nature fly past from their own secluded nest.

Another personal note is struck with the joyful, undulating banjo-backed, handclap percussion Springtime Girl, sung in the voice of Lucy’s grandfather who planted his wife’s name in daffodils in their meadow, forever reminding her of their love for the 40 years she outlived him. Again spotlighting Lucy on banjo and vocals, another real life inspiration can be found in Around The World which, sung from the perspective of round the world sailor Ellen MacArthur, is another number about overcoming adversity.

It’s aptly preceded by another shipbound number, Sailor’s Daughter, a gentle harmonised duet penned by Jon about defying people’s expectations and making your story an open page to be written on in your own words. It’s a theme that also informs the remaining track, Jon’s bluesy, friskily fingerpicked Wrist Burner where, conjuring thoughts of Richard Thompson, he sings about living in the moment.

You may not have encountered them before, but to paraphrase a quote from another bear and honey partnership, any day spent with them could be your favourite day.

Honey and the Bear discography