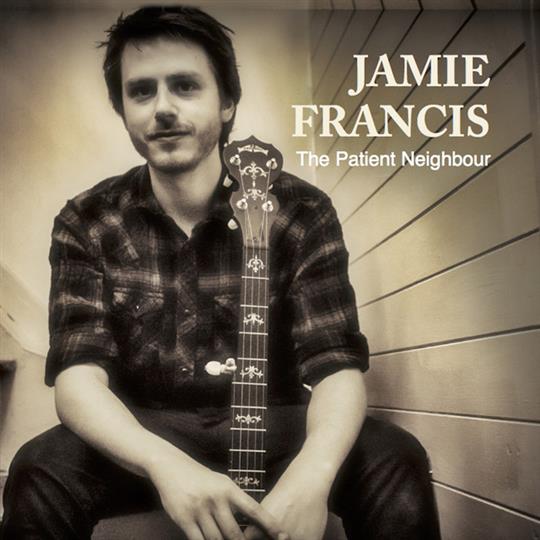 The banjo has had less than its share of starring appearances in British folk music. Jamie Francis seems to like a challenge, though. In his debut album, The Patient Neighbour, he manages to highlight the versatility of the instrument. In a completely instrumental set of tracks, his playing is given nowhere to hide, and it shines as a result.

This album starts off the way you expect for a banjo album: ’Wedding Reel’ is groovy and fast. But, the flying melody isn’t left to carry this track: there’s excitement in the harmony, which leaves you wondering what surprises the album has in store.

The Patient Neighbour delivers on this, with contrast throughout. On the small scale, there are the beautiful breaks and swells in Angeline the Baker. The textural leaps are messier in Kitchen Girl, but it’s a risk worth taking: without them, an album of tunes can become monotonous.

On the large scale, the number of quieter tracks was a welcome surprise, providing contrast, and bringing deep emotion. Dodd Wood, for example, is a real stand out track, with ornamented whistles from Toby Shaer, which keep it moving despite its slower tempo. Shaer and Graham Coe’s strings make Harbour Line another outlier from the other tracks, twisting the harmony and providing the banjo with enough space to shine.

The playing from Jamie Francis himself is technically superb. From the accentuation at the beginning to the sublime slide guitar on Thirlmere, he is also understanding of the emotional needs of the pieces. While the rhythm guitar is simplistic in the earlier tracks, you can see he understands the melodies. This is shown by the stylistic similarity between those written by him and those from other sources - about half and half, but making a cohesive set, which is no mean feat.

Recorded at Barnstorm Studios.
Released on TCR Music on 2 June 2017.