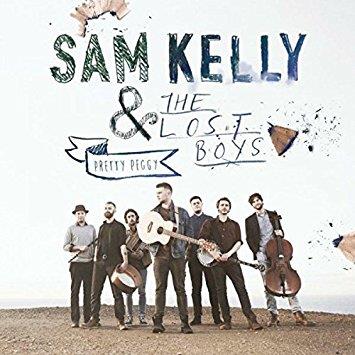 Sam Kelly’s seven piece band has been wowing the festival folk circuit for a while now. The Lost Boys live show is loud, electric and astonishingly bold. It’s a relief to say that this atmosphere is brought over (mostly) intact on Pretty Peggy.

The album’s opener Greenland Whale gives the listener some idea of The Lost Boys sound. This traditional whaling shanty is modern, noisy and effective. Especially noteworthy is the astonishing banjo playing of Jamie Francis whose sound is the backbone of many of the songs on Pretty Peggy.

Francis is also responsible for When the Reivers Call. This song, inspired by the Scottish/English border reiving in the middle-ages, is a ferocious rocker in 7/8 time. The melody is intriguing and doesn’t quite go where you expect it to. Kelly’s vocals are especially powerful here.

The centrepiece of the album is The Shining Ship. This six minute epic of betrayal and revenge builds up in intensity as the gates of hell open up to welcome the two lovers. This is a masterful arrangement which has hints of both prog rock and eastern music and is, arguably, the best song on the album.

Not all the songs on the album are as bombastic. The Bonny Lass of Fyvie is as gentle and as pretty as you like. It’s enhanced by the vocals of Cara Dillon and the Uillean pipe playing of Michael McGoldrick. It’s not a backhanded compliment to say that this song would not seem out of place on one of Dillon’s own albums.

There are other songs on Pretty Polly which are, for want of a better phrase, Radio 2 friendly. Kelly’s own Chasing Shadows, written for a friend going through a tough time, is insistent in its catchiness even when some of the lyrics don’t stray too far from cliché. Whilst If I were a Blackbird shows off Kelly’s voice to good effect and shows just how versatile a singer he is.

The album’s closer, The Rose, exemplifies all that is best about Pretty Peggy. This traditional French song, by the Belgian rock band Naragonia, has been translated from the French by Kelly. It’s a simple song comparing love to the life cycle of a red rose but given power by the haunting vocals of Kelly and the solid, wall of sound playing by the Lost Boys. It’s a mysterious, and bold, ending to an album full of contrast.

Pretty Peggy is a rowdy, rambunctious affair which doesn’t sit still long enough for it to be pigeonholed. It’s folk to be sure but it takes unexpected left turns into prog, MOR and pop music. It’s never boring and is a tremendous amount of fun. This fine album will surely be in contention come awards season.