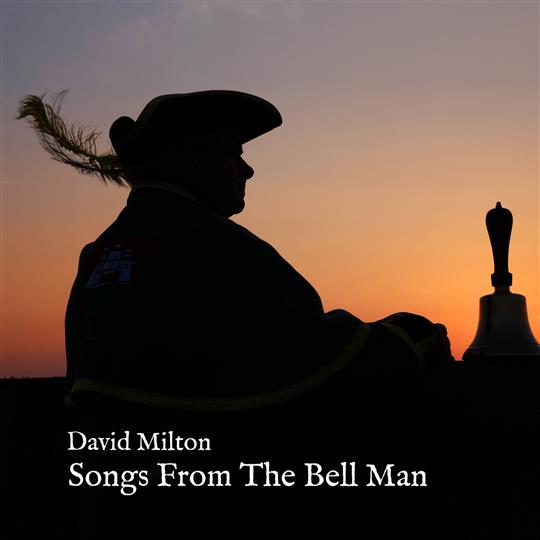 You would expect a town crier to have a powerful voice but what strikes you about David Milton’s debut album, Songs from the Bell Man, is the quality of his voice. It is apparent from the very first notes of the opening track, The Watchet Sailor, a song from the Somerset town where David holds the traditional office.

David is joined on the album by producer Ange Hardy on vocals and whistles, Lukas Drinkwater on guitar and double bass, Archie Churchill-Moss on accordion, Tom Moore on fiddle and Olly Winters-Owen on percussion.
The songs were chosen to tell something of the history of the town and local figures of influence. Some will be familiar but the most personal are those David has written himself, such as The Last Shift In, which tells of the closure of Watchet’s paper mill. This song also features examples of the local dialect, fast disappearing. Old Ben was a Watchet character David knew personally, a singer and melodeon player and source of local knowledge.

The Tennyson poem, Crossing the Bar, is a favourite with harmony groups but here it is performed as a standout solo, with understated accompaniment from guitar, accordion and fiddle.
Shanty group The Old Gaffers feature on Greenland Fisheries and Won’t You Go My Way. The latter is sung unaccompanied but leads into a jolly dance tune. They also join David on Bye Bye Me Roseanna, which ends the album in robust style.

Milton has a versatile voice that is equally at home singing shanties or quieter material. His own song, Last Long Ship, demonstrates that he could have an alternative career as a Somerset crooner! A love song to sailboats, Emma Louise, also fits into this category, while an unaccompanied rendition of the well known Row On is particularly moving.

Songs from the Bell Man is a fine collection of traditional, familiar and original material through which David Milton shares his affection for his home town and its history.