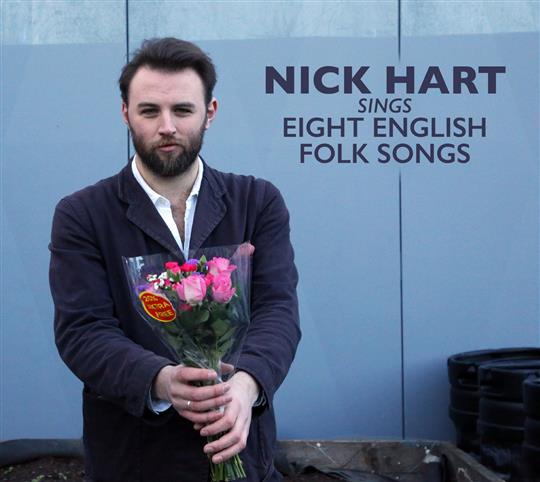 Nick Hart Sings Eight English Folk Songs is the perfect example of an album which does exactly what it says on the tin. Hart is a seasoned folk singer, and he has compiled eight of his favourite songs, primarily collected from the south-east region of England. The majority of the songs will be well-known to folk enthusiasts, but there is also likely to be a new gem on offer for most listeners.

The album opens with a joyful version of The Yellow Handkerchief. As Hart states wisely in his liner notes, “everyone does this one, and for good reason”. This song, better known to Bellowhead fans as Flash Company, is a true classic, and Hart’s version is fresh and interesting while still maintaining the traditional feel that defines this album.

This track also showcases the octave fiddle playing of collaborator Tom Moore, which provides a welcome change of colour in the accompaniment. Moore makes another appearance on Twenty-One Years on Dartmoor, a lilting ballad about a long jail term which is one the highlights of the album.

Another very fine upbeat number is a great rendition of Butter & Cheese, which Hart attributes to Norfolk singer Sam Larner. Interestingly, other artists have claimed this song for Sussex, but either way it is a fun, humorous yarn, and this version is greatly enjoyable.

In a similar storytelling vein is Turpin Bold, a lively tale of Britain’s favourite highwayman. This track really shows off Hart’s delicate, dextrous finger-picking guitar style, which adds such character to the album.

The stripped-back, raw sound which is the strength of so much of the album is also its downfall on one or two slower tracks. A slight lack of energy leads to a somewhat dirge-like rendition of Sweet William, which is a rare low point on this strong record.

A late highlight comes from The River Don’t Run, which is the only non-traditional song on the album. Written by Richard Guard and Anna Crockat, it tells the tale of the demolition of London slums to make way for St. Pancras Station. Hart’s tender delivery of this delightful song is a real joy.

Overall then, Nick Hart Sings Eight English Folk Songs is a wonderful record of some of England’s finest traditional songs, preserved in a beautifully unadulterated form.