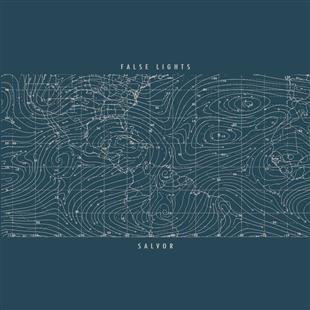 Born from an apparently drunken conversation between Jim Moray and Sam Carter, Salvor is a take-no-prisoners unapologetic folk rock album that brings the genre screaming into the 21st Century without once losing sight of its origins.

The personnel involved in False Lights is impressive. Besides Carter and Moray, the band includes Tom Moore on Fiddle, Nick Cooke on melodeon, Sam Nadel on drums and Jon Thorne on bass. They are very loud.

Most of the eleven tracks on the album are traditional with the majority well established in the folk canon.

The Wife of Usher’s Well is one such song. The words are traditional but are sung to a tune Carter collected from the shape note hymn, Loving Kindness. It’s a perfect fit with Sam’s voice cutting through a complex accompaniment that begins and ends with handclaps and distorted backing vocals through a middle section of thrash guitars.

Polly on the Shoe is next. This is taken from the singing of George ’Pop’ Maynard, champion marble player and Sussex folk singer. A tale of press gangs, sea battles and lost love, its insistent 4/4 beat anchors a strange, haunting melody which is accompanied by jangly guitar before ending in a haze of electronic noise.

Jim takes the lead vocal on The Banks of Newfoundland which continues the nautical theme. This is guitar rock in the style of REM enlivened by the harmonica playing of Jack Rutter and is a real toe-tapper.

Driving drums and furious fiddle are the hallmarks of Skewball, a piece made famous by Steeleye Span but here taking from the singing of A.L. Lloyd via Martin Carthy. This is a sort, sharp assault on the ears, but in a good way.

The Charlesworth Hornpipe is the only instrumental on the album. Written by Sam McGrady the tune is carried by fiddle and melodeon with guitar and drum accompaniment. This is reminiscent of Eliza Carthy’s work on her Kings of Callicut album and will surely invoke spontaneous acts of dancing in living rooms and kitchens.

The album continues with a brace of tracks informed by religious traditions. The Indian’s Petition is taken from a shapenote tunebook called The Southern Harmony, whilst How Can I Keep From Singing is written by the Baptist minister Robert Wadsworth Lowry. These two songs form the still centre to an otherwise raucous CD.

Tyne of Harrow is the first of two songs from Peter Bellamy. Jim Moray sings this 18th Century broadside ballad about a highwayman who robs from the rich and (sometimes) gives to the poor. Somewhat inevitably, he is to be hanged on Tyburn tree. This song suits Moray’s voice down to the ground and is the only piece that would sit comfortably on one of his own albums. The song has an excellent twangy guitar solo.

Carter gets to sing the Maid of Australia, one of the most famous bawdy songs in the folk tradition. This rattles jauntily along in ¾ time with the accompaniment quietening down so that the full force of the double entendre in the penultimate verse doesn’t get lost on the listener.

There’s two songs about death to finish off this varied album. Oh Death is a song to ward off the grim reaper as the protagonist asks if his life can be spared for another year. This guitar based version is light years away from the song’s origins in the American blues tradition but just as effective.

The album climaxes with a version of Tennyson’s poem, Crossing the Bar which was set to music by the American composer, Rani Arbo. The first part of this hymn-like song is sung by Sam to an accompaniment of a church organ which, in a hairs-on-back-of neck moment, is expanded to full band with added trumpet from Nick Malcolm. This is abruptly cut off and the piece ends with drums and percussion beating out a samba until that too is ended by a whistle. It is an astonishing finish.

Salvor is one of those records that grabs you by the scruff of the neck and won’t let go. False Lights have produced an astounding album that should be on many critics ’best of’ lists come the end of 2015.

1. The Wife of Usher’s Well
2. Polly on the Shore
3. The Banks of Newfoundland
4. Skewball
5. The Charlesworth Hornpipe
6. The Indian’s Petition
7. How Can I Keep From Singing?
8. Tyne of Harrow
9. The Maid of Australia
10. Oh Death
11. Crossing the Bar