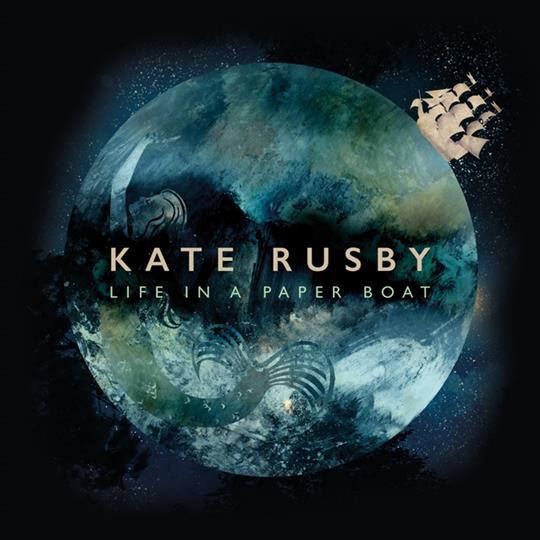 Life in a Paper Boat is Kate Rusby’s fifteenth studio album. By now, fans of the South Yorkshire singer know what to expect; impeccably sung songs, both composed and traditional, in tasteful settings that respect both the material and the singer.

This is not to say that Life in a Paper Boat plays completely safe - far from it. The album’s soundscape is subtly different from what listeners of Rusby have, perhaps, been used to. The accompaniments are more full bodied and atmospheric with washes of keyboard and strings that serve to accompany Rusby’s voice without drowning it in too much electronica.

As usual Rusby’s choice of songs ranges from the traditional to the self-penned. There’s a setting of the Pace Egging Song which celebrates the West Yorkshire tradition of Pace Egg village plays. Rusby and Damien O’Kane’s arrangement turns this into a marching song for diatonic accordion, bouzouki, whistles and flute.

A cover of Scottish singer-songwriter Archie Fisher’s The Witch of Westmoreland is one of the highlights of the album. Sparsely arranged for just electric guitar, double bass and Moog it allows Rusby’s pure voice to powerfully convey the sentiment of the song.

Although there are some upbeat songs on the album, the overall mood is one of melancholy and sadness. This is nowhere more evident than the title track, which was inspired by the refugee crisis. Rusby’s lyrics, which paint a powerful picture of a young woman fleeing death and destruction with her young child, counterpoint the fragility of life with hope for a better, safer life.

One notable feature of the album is Rusby and O’Kane’s decision to use traditional folk instruments in non-traditional ways. This is highlighted on Hunter Moon, a tale of unrequited love of the moon for the sun. Here fiddles turn into violins, which are used as part of a string quartet to create an atmosphere of yearning and longing.

For all the moodiness, the album closes with Big Brave Bill, a delightful song inspired by a bedtime story told to Rusby’s two children. A song about a superhero fuelled by Yorkshire Tea (and by a small brass ensemble) is typically Rusby in its directness and charm.

Although on the surface it may appear that it’s just business as usual, Life in a Paper Boat represents a new direction in Rusby’s career. So put the kettle on, make a brew and sit down in the company of this fine new album.

1. Benjamin Bowmaneer
2. Hunter Moon
3. The Ardent Shepherdess
4. Life in a Paper Boat
5. Only Desire What You Have
6. Hundred Hearts
7. The Mermaid
8. Pace Egging Song
9. The Witch of Westmoreland
10. I’ll be Wise
11. Night Lament
12. Big Brave Bill