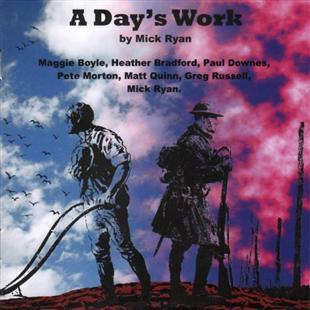 At first the heart sinks at the prospect of listening to another album commemorating the events of World War I. In this anniversary year there has been a glut of records, TV shows and books dealing with life in the trenches. What can there possibly be left to say?

Mick Ryan’s folk opera A Day’s Work was first performed in 1995 and has been re-written and re-recorded to mark the centenary of the Great War. This recording documents the original songs used in the show which is a mixture of music, spoken word, verse and movement. The work tells the tale of a group of farm labourers, members of a ’mummers team’ who join up (or refuse to) and end up meeting their fate at the Battle of the Somme.

The musicians Ryan has chosen to tell his story span two generations of folk artists. Alongside the likes of Pete Morton and the much missed Maggie Boyle there are the newer faces of multi-instrumentalist Matt Quinn and Young Folk Award Winner, Greg Russell.

Part one of A Day’s Work is set in an English village at Christmastime in 1914. The songs here tell of life in the village and the gradual encroachment of war into the lives of the young men who work the land.

Gradually a narrative develops which contrasts the enthusiasm for war (Come and Be a Soldier, Join the Game) with the misgivings of a mother (Another Harvest) and the protestations of a conscientious objector (Peace), sung by Greg Russell who has a rich voice that belies his years.

Part two is mostly set at the front during 1916. Here, the songs deal with the fears and pleasures of the ordinary Tommy. The Night, talks about the terrors that creep up on a soldier in the dead of night when darkness brings on the ’fear of fear’.

The Estaminet, by way of contrast, tells of the ’night before the day’ when soldiers who had just got paid spent all their wages on cheap wine (and possibly more) at cafés and other drinking houses. This is the most upbeat song on the album but, even here, death is not far away.

The centrepiece of the opera is the powerful The Lark Above the Downs. This is sung by the Conscientious Objector the night before his execution for refusing to fight, after earlier obeying an order from a superior. Magnificently sung by Russell with a haunting flute accompaniment from Boyle, the song contrasts the new life awakening in the countryside surrounding his home village with his impending death. It is, by far, the strongest song on the album.

If there is a criticism to be made of A Day’s Work it is that, at some points, the songs deal in cliché and archetypes. However, it has to be remembered that clichés usually exist because they have some truth to them and these songs deal with truths and experiences which should never be forgotten.

So, is there room for another World War I album? Yes, if it is as powerful and direct as A Day’s Work.