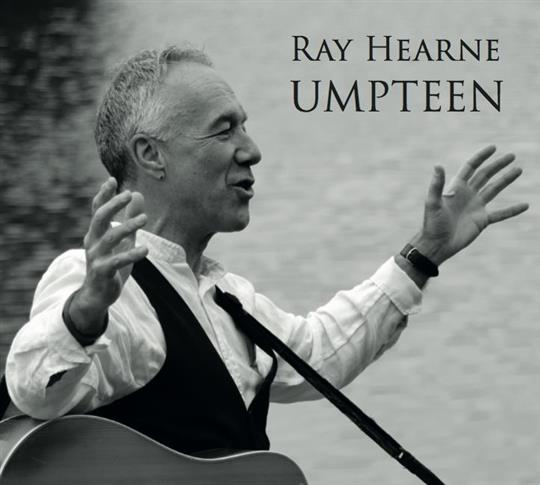 Umpteen is a new album from Yorkshire-based folk singer and songwriter, Ray Hearne. From an Irish family who settled in South Yorkshire he has his cultural roots in the traditional Irish tunes of his parents but is deeply influenced by the stories, surroundings and dialects of the South Yorkshire coal and steel communities he grew up in, and in the post-industrial landscape they have become, where he still resides.

As Hearne says in his own words: “Where were the songs of South Yorkshire steel and coal? I knew songs about the Ohio, Thames and Shannon but not about the Don and Rother which had flowed through the whole of my life. Where were the songs in our accent? Shocking to say, they were nowhere to be found. It dawned on me that we would have to write them ourselves.”

Following on from the well-received previous album The Wrong Sunshine, Umpteen is a collection of fourteen self-penned songs. As well as bringing in some evocative lyrics, delivered in a warm, rich, no-holds-barred South Yorkshire tongue, there’s also some fine musicians and guest singers performing on this too, including Belinda O’Hooley, Jude Abbott, Greg Russell and Ciaran Algar.

Highlights on the album include opening track Moonpenny Hill, a passionate, powerful folk anthem, bitingly, savagely political but equally full of warmth and humanity. Here, Hearne reflects on the everyday struggles of the 84/85 miners’ strike where, in spite of “bitter the wind from the south” there is the warmth provided by comradely solidarity, supportive sisterhood and thoughts of the coming spring.

Away from the political narratives The Longest Hot Summer, with lovely accompanying piano from Belinda O’Hooley, is a nostalgic recollection of the gift of long hot summer days where “blossoms are garlanded in ginnel and vale”, the old folk are on their allotments, and there is an age to wait between “clocking on and clocking off.”

The Hales of Henry Street is written in memory of Private Henry Hale of Rotherham and thousands like him slaughtered in the First World War. Folk listeners will have heard many similar, equally heart-rending, recollections in recent years. But the lyrics eloquently capture both the horrors of the trenches and the impact on the folk back home. Lush brass from Jude Abbot gives the song an evocative, mournful and thoroughly South Yorkshire feel.

Whether it’s hard-hitting protest songs about the Thatcher era, wistful memories of growing up or historical tributes to fallen brothers a century ago, the spirit of South Yorkshire oozes out of every groove of this CD with typical honesty, humanity and good humour. Ray Hearne has done his adopted and beloved homeland proud with this fine set of songs.

Released on No Masters Co-operative Limited on 27 May 2016.

1. Moonpenny Hill
2. Holm Flatt Street to Holm Flatt Street
3. Hurtle Through a Portal
4. The Longest Hot Summer
5. Looking for Daniel Grubb Wheller
6. The Hales of Henry Street
7. The Hall of Fish
8. The Quinn Twins and Harrison
9. By Way of Abdy
10. The Kid Who Killed the Milkman
11. The Old Trincomalee
12. For the Love of Tom
13. That ’Un and This ’Un
14. Hearts of Steel