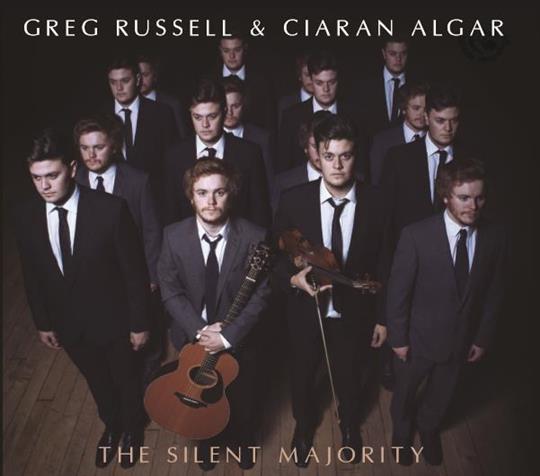 Since they won the BBC Young Folk Award, shortly after the release of their first album The Queen’s Lover in 2012, Greg Russell and Ciaran Algar have gone from strength to strength. The duo have developed a reputation for skilful, exciting records as well as fantastic, engaging live performances, and with The Silent Majority, their third album, show no signs of slowing down.

Russell and Algar are at the forefront of the modern British folk scene, and listening to this record it isn’t difficult to see why. They are incredibly versatile - the album opens with a catchy instrumental Prologue, which really showcases Algar’s superb fiddle playing, but they are definitely at their best when this is juxtaposed with Russell’s powerful, distinctive vocal.

There are several excellent songs on this album, an early highlight being the instantly memorable George, with a refrain that almost forces you to sing along. Did You Like the Battle, Sir? and Limbo are also excellently in the same vein. All three of these songs, as with the majority on this album, deal with serious subject matter, but the pair maintain a light mood to the music and thereby brilliantly avoid the album becoming depressing.

That isn’t to say that there aren’t slow numbers. We Must Be Contented and Brisk Young Man show off the more tender side of the duo, and the mix of sensitive fiddle accompaniment and gorgeous harmonies serves to make these just as enjoyable.

There are also further instrumentals, such as The Intruder and the humorously titled Swipe Right, and they are magnificent. Algar’s fiddle playing really is some of the finest out there, with stunning technique mixed with a musicality which makes it impossible not to be drawn in to these numbers. While always in the background, Russell’s guitar playing is a superbly subtle accompaniment which really allows the music to flourish.

In conclusion, The Silent Majority is a fantastic showcase of the talents of this phenomenal duo, and it sounds as though there’s plenty more where this came from.

Full disclosure: Ciaran Algar used to write for Bright Young Folk, but is not actively involved with us at time of writing.