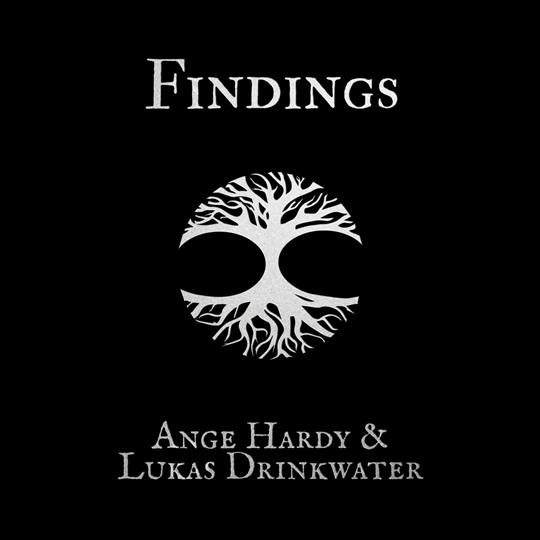 After the painstakingly shaped Esteesee, the musical folk concept inspired by life of Samuel Taylor Coleridge, comes a different challenge for Ange Hardy: working as a duo. Not that she’s averse to moving from the controlled comfort zone of a solo artist, having toyed in various collaborations and combinations in the past.

The partnership with Lukas Drinkwater not only guarantees what seems to be the usual Hardy hallmark of delicately crafted songs with a fine balance of delicate music and voice, but with Findings extends the sonic depth, adding the extra voice to provide more layers and textures.

Not only that, the duo expand the occasional arrangement for a full backing band which includes significant first lieutenant contributions from Ciaran Algar on fiddle, Archie Churchill-Moss on the diatonic accordion and Evan Carson’s percussion.

Add guest contributions from Steve Pledger (co-write on Far Away From Land) and a couple of folk’s big names, Nancy Kerr and Kathryn Roberts on True Are The Mothers - an ethereal medieval sounding piece written for them and impossible to resist getting them involved to provide a tad of icing on the cake. A sign too of the Hardy & Drinkwater status and pulling power that they’ve been happy to add their weight to the music. It’s not the first appearance of a rustic and organic air about proceedings either; with Bearded Ted Of Raddington and The Berkshire Tragedy it could even form the Robin Hood Trilogy…

Part written at an EFDSS funded songwriting workshop the new material once again draws from the tradition added to original songs and tunes - the album title referring to the joining together of jewellery components, yet in a broader sense it is the blend of the two musicians and their collaborators, their ideas and inspirations which are the real findings. The coming together to form a unique and creative whole.

Familiar themes of the Hardy legacy - family, migration, local industry and trades - surface from the off with the full band. In particular The Widow and Daughter Dear Daughter having their roots closer to home and closer to the heart.

Fired by the use of topical accounts to create folk song, Far Away From Land might have a fiddle ’riff’ close to Seth Lakeman’s Riflemen Of War as it builds on a news story uncovered during the EFDSS residency, yet is a fresh twist on the tale telling structure of traditional song. The touching Invisible Child is in a similar vein while By The Tides, which may be familiar from pre-release, is still a delight at the moment where Drinkwater’s rounder tones briefly come to the fore, backed by Hardy. A rare but exquisite touch.

What soon becomes evident is that Findings is a fine balance between the work as duo and the duo as the front of the expanded line up, and it may be that it’s in the work of the latter that we find the highlights. The term ’greater than the sum of the parts’ is banded about yet it’s the idea of what Hardy has called “weaving elements of traditional songs into our own” which is the strength of Findings.

Take the arrangement of Bonny Lighter Boy as a perfect example; facing just a lyric and re-imagining how it might sound, and then Hardy takes centre stage by foretelling an unknown development of the Little Boy Blue story, inevitably ending in a typically gruesome folk ending. The age of discovery is alive and kicking.

And Findings is exactly that - a journey of discovery and one which seems has some course to run.

Recorded at Beehive Studios and released on Story Records on 14 September 2016.

1. The Call / Daughters Of Watchet / Caturn’s Night
2. The Pleading Sister
3. The Trees They Do Grow High
4. Far Away From The Land
5. By The Tides
6. My Grandfathers / Bearded Ted Of Raddington
7. True Are The Mothers
8. The Berkshire Tragedy
9. The Widow
10. Bonny Lighter-Boy
11. Invisible Child
12. Daughter Dear Daughter
13. The Parting Lullaby
14. Fall Away