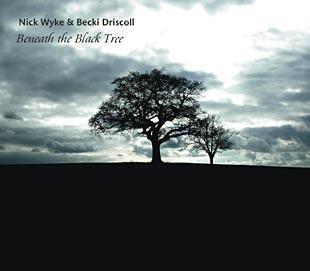 Nick Wyke and Becki Driscoll are an increasingly well known fiddle duo based in the South West. Their eponymous first album was released in 2006, and the pair have since been regulars at folk festivals and in running music workshops.

Their new album, ’Beneath the Black Tree’ also features guests Jackie Oates (viola) and Keith Angel (percussion). The tracks are traditional English folk based on the fiddle, but with a real inventive touch introducing elements from other musical genres. The result is a dramatic and atmospheric set of songs. The strongest tracks are those where Nick Wyke’s powerful vocals come in to tell the compelling story of the highwayman driven to a life of crime to keep his wife in pretty ribbons (The Robber) or the fine interpretation of the traditional tale of the proud tailor going to war (Benjamin Bowmaneer).

Wyke & Dricoll’s playing is skillful and full of class, but the down to earth nature of the material let me imagine I was hearing this at the pub, in front of a roaring fire with a few good friends. I’ll be imagining myself ’a wild and wicked youth’ for some time. Highly recommended.

A live performance from the 2007 Shepley festival.