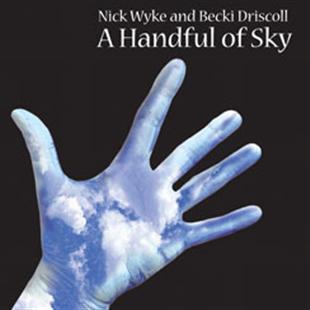 Nick Wyke and Becki Driscoll are a duo based in North Devon. The West Country plays an important part in the material on their latest album A Handful of Sky. Nick and Becki both sing and play fiddle and viola, while Becki also plays bassoon. They are joined by James Budden on double bass and Ellen Driscoll on French horn, adding extra depth to the overall sound.

Songs collected by the Rev Baring-Gould make an appearance as you might expect for a Devon duo. The swaggering tune of Rambleaway matches the song’s central character as he seduces poor Nancy. The Torrington Ringers is a combination of a set of words from a bell ringer who couldn’t remember the tune and a version collected by Baring-Gould. The song gives a little detail about each of the ringers in turn and their trades. The melody has a gentle waltz feel, leading into a tune by Becki inspired by a six-bell peal.

Versions of familiar traditional songs are included on the album. The Cornwall Apprentice is a version of a song also known as the Sheffield Apprentice. Nick takes the vocal lead here. The song is a warning to the country boys who go to the big city - spurning the advances of one’s mistress can prove fatal it seems. The song has a jolly tune for such a sad tale.

The version of The Cruel Mother is from Dorset. It is an appropriately stark arrangement, with pizzicato accompaniment at the opening. The French horn is added to great effect in middle verses. The arrangement reverts to just voice and minimal fiddle part for the final verses.

The liveliest song on the album is the final track - The Exmoor Ram - in which the well-known Derby Ram seems to have moved to the West Country! This is sung by Becki to simple accompaniment. Nick adds harmonies in the chorus. The song is a rousing end to an enjoyable album.

As well as this fine selection of songs, there are some equally well-executed tunes from the traditional Bridgewater and Dorchester Hornpipes, to Bridge House (a house Becki once lived in) where the French horn makes another welcome appearance, to Nick’s Mrs Lovett’s Pies, inspired by the film of Sweeney Todd!

A Handful of Sky is a fine mix of sympathetically arranged traditional material matched seamlessly with excellent original music.