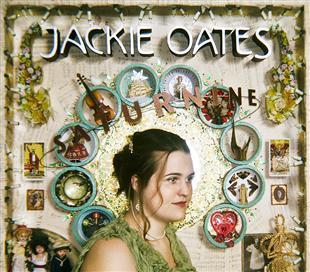 Saturnine is the most accomplished album to date from Jackie Oates, expertly blending original and traditional material in a well balanced and appealing manner.

This balance is particularly evident in the songs IOU, a superb, heartfelt and irresistible piece of songwriting from Jackie and the stand out track of Saturnine, followed by a sensitive interpretation of Four Pence a Day featuring male voice group The Claque. The latter track, with its simple yet moving vocal accompaniment feels totally authentic, and almost as though it could come from any period since the invention of sound recording.

The album opens with The Sweet Nightingale, a tale of love that is full of charm and character, before a change of pace into the sing along Marrow Bones again featuring the grouped voices of The Claque to great effect.

The gloomy material of Poor Murdered Woma’ is lightened by the bright percussion accompaniment to Jackie’s vocals. The local musical traditions of the South West are well represented too, with the wistful and evocative instrumental The Hills of Trencrom/Pedn Olva, while Fin(N)Ish(Ish) provides a contrasting instrumental piece, full of pace and swagger.

Saturnine is an outstanding collection of contemporary British folk music and should prove to be essential listening.