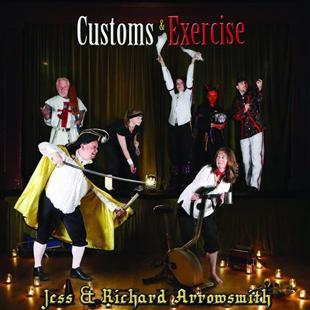 Customs and Exercise is a well balanced mix of tunes and songs, both traditional and original. A couple of tracks (Smugger’s Song and Where the Bee Sucks) also appear on their previous release Off We Go, an album of nursery rhymes, but they are included here for the benefit of those who don’t have small children!

Jess’s pure voice can cope with anything from the lament of a single girl. to a poignant and tragic Death of Queen Jane (traditional words set to a tune by Jess) to the rather bloodthirsty Hanged I Shall Be.

Single Girl’s Lament (one of Jess’s own compositions) conjures up images of Jane Austen novels with its mention of frocks and ribbons - all it lacks is a bonnet or two! Harmony vocals are provided by Nancy Kerr in a simple and effective a cappella performance.

Jess and Richard have a knack of making a self-penned song sound traditional. Sometimes the ideas are taken from traditional sources of course, for instance Jack Lay Back is based on the Jack of nursery rhyme and children’s stories. He also puts in an appearance in Jack Come Sell Your Fiddle.

Two smuggling songs appear on the album - The Smuggler -remarkable not only in that it is a traditional song about a smuggler, but it is also from a female point of view. The other, Smuggler’s Song, is one of many Kipling poems set to music by Peter Bellamy.

The Arrowsmiths produce a very full sound for just two instruments and this is especially evident in the tune sets. As with the songs, some are traditional, and some original. Including a Playford tune is almost obligatory on a folk album these days and here we have the welcome inclusion of the Hare’s Maggot. Another Playford Tune, Barham Down, precedes Jack Come Sell Your Fiddle where we are treated (if only briefly) to Richard’s singing voice.

The album opens in rather violently with Hanged I Shall Be, but ends in a comforting manner with a beautiful rendition of Shakespeare’s Where the Bee Sucks.

Customs and Exercise is a well thought out album, displaying Jess and Richard’s musicianship to the full.