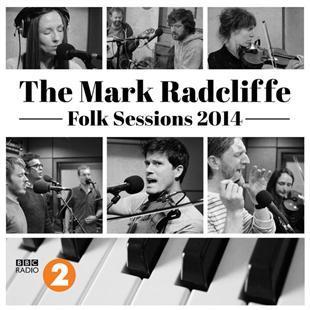 A year on from the first acclaimed compilation of live highlights from BBC Radio 2’s Folk Show, presenter Mark Radcliffe and his production team have selected highlights from 2014’s intimate Salford studio sessions. Like its predecessor, the new release features performances by established artists alongside lesser known, up and coming acts.

The 20-track review of the year opens with Mark’s Folk Awards co-presenter, Julie Fowlis, who is perhaps best known for her thrilling contributions to the soundtrack of the Disney/Pixar film Brave. Here though, Julie sings John MacLean’s Do Chalum (To Calum), his sparse Gaelic lament to his brother, who died years before his time.

Moving south of the Scottish/English border, Nancy Kerr toured and recorded as a member of the Full English project (along with some others included here) but she also released her debut solo album during 2014. Never Ever Lay Them Down became Mark’s favourite track of the year, so it is no surprise to find the session version here. Despite being a new song, it has a familiar traditional feel thanks to the driving backing of the brilliant Sweet Visitor Band.

Most of the material featured on Folk Sessions 2014 is new but Bristol’s Spiro celebrated the reissue of their 1996 debut Pole Star with a live studio performance of some older pieces. Their session included a stirring, hypnotic rendition of that album’s wonderful The Sky is a Blue Bowl, which reminds of the work of composers Terry Riley or Steve Reich with its layers of repetitive melodies that easily suggest vast vistas and expansive open skies.

Pre-historic mound Silbury Hill can be found a short journey east from Spiro’s base, along the M4 to Avebury. Award-winning duo Phillip Henry and Hannah Martin were inspired by the vast earthwork while out walking nearby and their expert use of banjo and dobro give their contribution a fitting, haunting atmosphere to accompany the mysterious ancient hill’s loneliness within its landscape.

Back over to the west and into Wales, where newcomers 9Bach offer a rather contemporary take on their country’s traditional songs. On Plentyn they construct layers of rhythmic vocal harmonies that build to a peak of PJ Harvey-like distorted electric guitar. It doesn’t matter that the song is sung in Welsh: there is much to enjoy in the music and the sounds of the words.

This short round-up ends where it started. Scotland’s Mischa Macphearson Trio are yet to release any material other than their Folk Show session but the beautiful Cha D’fhuair Mi’n Cadal (I Got No Sleep) will ensure demand for their rumoured debut album, as will Mischa’s 2014 Gaelic Singer of the Year Award.

The Mark Radcliffe Folk Sessions 2014 showcases the wealth of diversity that can be found in the current UK folk scene, aided by the compilers’ care to include artists from different parts of the UK. The welcome inclusion of Gaelic and Welsh songs proves that language is no barrier to discovering and enjoying new music.

It would be impossible to detail all of the thrilling music on this album in a review of this length: there is so much more to discover in this highly recommended collection.