The Young’uns - When Our Grandfathers Said No 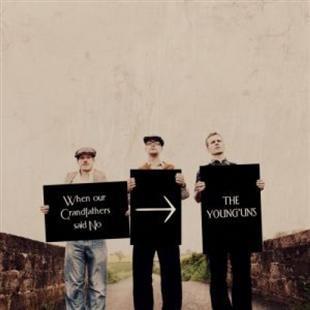 Known for their lively banter on stage, The Young’uns show different aspects of their talents on When Our Grandfathers Said No, their third album, and the first under the guiding hand of Stu Hanna. This album is more polished than its predecessors but without losing any of the charm and spontaneity you would expect from Sean Cooney, Michael Hughes and David Eagle. While their two previous albums were a lot of fun, Stu Hanna’s influence is evident here, as he has really made the most of the three voices, as well as their instrumental skills.

This is an album of contrasts, from shanty-style singing with songs such as Roll Down and Pique la Baleine (ie “Harpoon the Whale”- delightfully chaotic), Sean Cooney’s own compositions based on the area where he grew up and his own family (The Battle of Stockton, One December Morn, Love in a Northern Town amongst others), and some lovely non-standard covers (Wild Goose and James Taylor’s You Can Close Your Eyes - the latter a bit of a surprise!). Particularly striking is The Chemical Worker’s Song, written by Ron Angel, who was responsible for the trio’s name as well as their first booking.

Sean takes the vocal lead on most of the songs, but Roll Down (from Peter Bellamy’s opera The Transports) and You Can Close Your Eyes are led by Michael, with David leading the gorgeous Wild Goose. This is an epic track, not just because of its length (it is the longest on the album) but also in terms of the musical arrangement. David Eagle’s rich deep voice is accompanied by guitar, piano and accordion (with some lovely scrunchy chords from the latter in places).

This album showcases The Young’uns perfectly with its sharp contrasts of singing styles and musical arrangements. A must for all lovers of harmony singing.