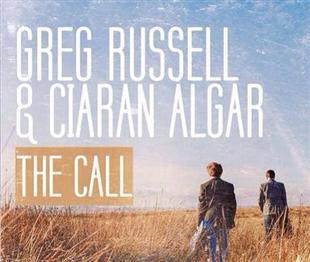 Another terrific folk duo; another terrific second album; another set of youngsters set to carry the flame. We are becoming spoiled with the likes of Blair Dunlop, Luke Jackson who have set the standard and raised the bar and now it’s the turn of Greg Russell & Ciaran Algar.

Already celebrating the 2014 Horizon Award to add to the 2013 Young Folk Award in the annual and prestigious Radio 2 Folk Awards, the duo now present the follow up to their 2012 debut The Queens Lover.

They’ve paid their dues by gigging in folk clubs up and down the nation, at big-name festivals and taken their turn with the almost obligatory Mark Radcliffe session. Between them and armed with guitar, bouzouki, concertina, fiddle and of course the voices, they concoct a broad musical palette on which to hang their range of material.

With the underlying premise of “if it ain’t broken why fix it” they’ve trodden a similar path to their debut album in the approach to The Call. Backed again by Fellside Records, they’ve gathered a set of songs and tunes which are spot on in terms of allowing them to polish their rapidly rising star.

From the opening Swedish ballad Roses Three where the interplay between bouzouki and fiddle are impacting within seconds and the lively romp through The Silent Jigs it’s pretty apparent that the duo are very much in tune and continuing to develop what they started with The Queens Lover.

Alongside some original material, they’ve gathered traditional and contemporary songs and put their own unique spin on them. What’s exciting is that the way in which such young performers breath life into traditional material, but then that may be the key; no preconceptions, beyond a healthy respect and a desire to capture them in a new light.

It’s fascinating to hear them interpreting some of the more traditional material. Their adaptation of Royal Comrade comes in the guise of a stately and solemn delivery while The Rose In June is an ambitious ballad with Jeana Leslie contributing in both the arrangement and in her piano being the main instrument alongside some subtle fiddle. The piano taking the song in a uniquely different direction and marking the track as one of the more diverse recordings on the album. It’s a measured yet striking performance which may well be the centrepiece, of the album both in its sequencing and in its stature.

The instrumental sets of tunes all have intriguing stories and origins: The Silent Jigs opens with Ciaran’s own Silent Jig before hurtling down a distinctly Irish path.

Absent Friends is dedicated to Joe Gilligan whose tragic death at an early age inspired the foundation of a trust to support young cancer sufferer.

The George’s set is named mischievously after engineer and studio stooge George Hunter-Brown which builds up slowly from a gentle and mournful air to a frenzied folk out. The last thing he would have wanted naturally becomes inevitable.

Their sense of humour and lack of pretension carries through in a similarly playful fashion on Away From The Pits, where Ciaran’s home town of Stoke-On-Trent is described as a metaphor for a girl, yet before he digs any deeper, discretion becomes the better part of valour - listeners draw your own conclusions.

Being a folk album, naturally, the topics gravitate towards exploring the darker side of life and traditions of cockfighting and workhouses covered in the songs which bear their names. The former is disguised with a sprightly tune which kind of masks the more unsavoury lyrical content and the illicit underground nature of the sport.

What a difference a year or two makes. The guys have blossomed from the small acorn of Northwich Folk Club and fellow venues in the Cheshire area, members of whom who saw it all and encouraged it from the start and will be standing like proud parents, chests puffed out in pride as their favourite sons come home to roost.

The Call is yet another outstanding show of maturity and enormous promise. It’s becoming a bit common yet reassuring to again declare that the future is bright. Whether or not they’ve gone so far as to be accused of making folk music sexy remains to be seen, yet the genre continues to attract young new talent in its new guard who are taking up the mantle so confidently and convincingly.