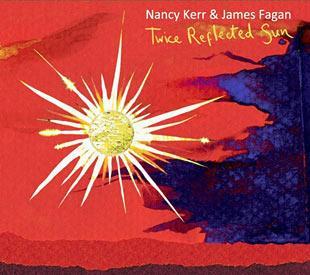 “Twice Reflected Sun” is unusual for this well-established duo in that all the tracks are self-penned, with songs by Nancy, and two tunes composed by James. The pair take turns to lead the vocals on the songs and between them play fiddle, viola, bouzouki, guitar and mandolin.

Rick Foot guests on double bass, while Rob Harbron (with whom Nancy and James play as a trio) appears on concertina and guitar. He also engineered and co-produced the album.

The songs are inspired by the landscape and culture of both Australia and England and occasionally the links between them - “Dolerite Skies” points out how Tasmania share the same mineral that is found in much of Britain’s coast.

The poignant “Queen of Waters” was written for a friend who had given up living on a canal boat to return to live on dry land (as Nancy and James have recently done).

Two songs celebrate significant dates: “Sweet Peace” is set to become an anthem, with a beautiful chorus, and was written for Pete Seeger’s 90th birthday, while “Rammed Earth” marks Charles Darwin’s 200th. “Keep Hauling On” opens (and ends) with a rousing a cappella chorus, and should become a favourite at live performances.

“I Am The Fox” deals with fox-hunting, a common subject of traditional song but here we see things from the fox’s point of view. James’ two tunes “The Floating Mountains” and “Night Night” provide a pleasant interlude from the songs, and even without words, conjure up the images hinted at in their titles.

The whole album is exquisitely executed and a joy to listen to.