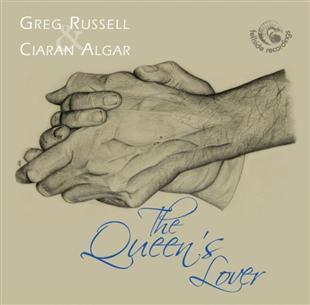 The Queen’s Lover is Greg Russell and Ciaran Algar’s wonderful debut album. Russell and Algar are fabulously young and whilst their youth adds to the freshness of their sound it does not detract from their musical ability - you will have heard releases by musicians twice their age but with only half their talent.

As usual, on any album containing the track, The Two Magicians is one of the highlights of The Queen’s Lover. A healthy fairy story is set off with refreshingly lively musical accompaniment - and for once the ending isn’t the grim one of death, but marriage.

There are several other traditional favourites, including a soulful version of On Raglan Road. Having never heard a version of Hard Up I think I have found another traditional song to add to my favourite list, it is a great song with a catchy chorus and a comment on the fashion statement of wearing a ragged coat.

Amongst the traditional tunes there are some original compositions, which include the titular track The Queen’s Lover about Elizabeth I. They have also undertaken revisions of the traditional songs they have covered. The New Railroad is one of the more obvious of these re-arrangements and it works well, as it loses some of its bluegrass sound, but not enough to consider it a favourite.

The instrumental tunes are infectiously energetic, Greg’s Set is the strongest of its type on the release but they are all truly joyful and lively. The fiddling is executed with clarity and precision.

Some of the slower tracks don’t quite measure up to the strength of their faster and more rhythmical numbers - but this is more of a reflection of personal taste than any problem with the music itself, as the slower numbers are still delicate and intricate. They’re just not rabble-rousers.

The Queen’s Lover really is a triumph. I can imagine the frequent references to their youth probably annoys Greg Russell and Ciaran Algar but this album is a testament to the fact that youth can easily outshine the most experienced. It is a fantastic debut, marking Russell and Algar as ones to watch on the young folk scene. The epitome of bright young folk.